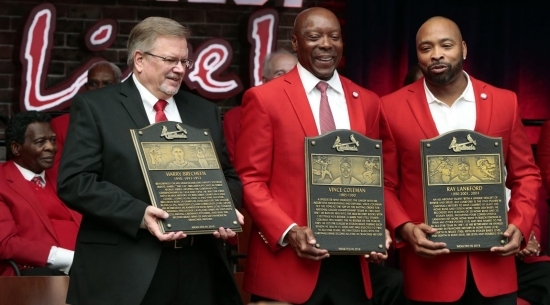 As such, it is important to us that yesterday the St. Louis Cardinals officially inducted Ray Lankford, Vince Coleman and Harry Brecheen to their Hall of Fame.

Lankford debuted in the Majors for the Cardinals in 1990 and in his first full season he would finish third in Rookie of the Year voting while leading the NL in Triples. The Centerfielder would have three 30 Stolen Base seasons and was an All Star in 1997 where he would have career highs in the Slash Line (.295/.411/.585) while finishing 16th in MVP voting. Lankford also put up decent power numbers with six 20 Home Run seasons. He would be traded to the Padres in the 2001 season but would return to finish his career in St. Louis for one final campaign in 2004. In his overall career with the Cardinals Ray Lankford had 1,479 Hits with 228 Home Runs and 250 Stolen Bases.

Vince Coleman played his first six seasons in baseball with the St. Louis Cardinals where he proved to he the best base stealer in the National League. In all six of his seasons he would finish first in the NL in Stolen Bases, the first three of which would see him exceed 100 swipes. Named the Rookie of the Year in 1985, he was also an All Star twice in 1988 and 1989. Coleman had 937 Hits and 549 Stolen Bases for St. Louis.

Harry Brecheen will be inducted posthumously. The southpaw played for the Cardinals from 1943 to 1952 and was a six time 15 Game winner. Brecheen was a two time All Star (1947 & 1948) was the National League Leader in ERA, FIP, WHIP, SO/9 and SO/BB in the 1948 season where he finished fifth in MVP voting. His son in the represented him in the ceremony.

We here at Notinhalloffame.com would like to congratulate the latest members of the St. Louis Cardinals Hall of Fame.