The Philadelphia Flyers retire the #88 of Eric Lindros 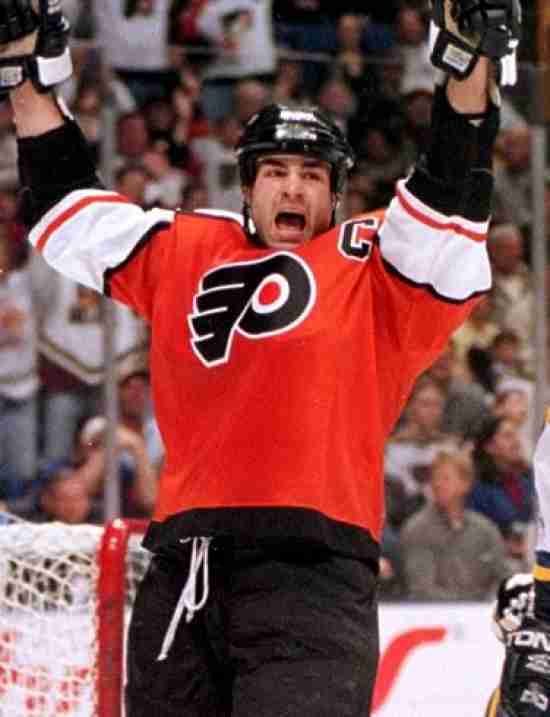 20 Jan
2018
Not in Hall of Fame
As we slowly work on the greatest 50 players of every major franchise of the big four of North American sports we will eventually look at how each of those teams honor those who played for them in the past. As such it is newsworthy to us that the Philadelphia Flyers retired the number 88 of Eric Lindros.

Lindros was drafted first overall by the Quebec Nordiques in 1991 and famously refused to report to the team. He sat out a year and was traded to the Flyers in a megadeal and he would immediately become the face of the franchise. A power forward in every sense of the word, Lindros’ imposing size was complimented with finesse skills. In the 1994-95 strike shortened season, Lindros was named the Hart Trophy winner while also earning First Team All Star Honors. The following season Lindros had a career high 115 Points and was named a Second Team All Star. In 1997, he led the Flyers to a Stanley Cup Final and was the playoffs leading scorer, though the team went down to defeat to the Detroit Red Wings.

As big and as powerful as Lindros was, his style of play made him injury prone and more specifically he began to get concussed often. He also suffered a collapsed lung, which was followed by a team edict for him to fly back to Philadelphia (this occurred in Nashville). He didn’t, and had he done so he would have likely died in the plane.

The injuries led to a public battle between Lindros and Flyers management, namely GM Bobby Clarke who questioned his star’s toughness. During the 2000-01 season, Lindros was cleared to return but refused to report and would sit out the remainder of the season. He would later be dealt to the New York Rangers but to say that the parting between the Flyers and Lindros was smooth would be an inaccurate one. Number 88 would play five more years in the NHL with New York, Toronto and the Dallas Stars before retiring.

Bridges were seemingly burned but Lindros would play in the Alumni Game at the 2012 Winter Classic at the request of GM, Paul Holmgren. Lindros would later be inducted into the Hockey Hall of Fame in 2016 and this was mostly due to his work as a Philadelphia Flyer.

As a Flyer, Lindros was a six time All Star and he scored 659 Points over 486 Games, an incredible 1.36 Points per Game Average.

Lindros becomes the sixth player to have his number retired by the Flyers. He joins Bernie Parent (1), Mark Howe (2), Barry Ashbee (4), Bobby Clarke (7) and Bill Barber (16).

We here at Notinhalloffame.com would like to congratulate Eric Lindros for achieving this latest honor.
Tagged under
Tweet

More in this category: « Barenaked Ladies to be inducted into the Canadian Music HOF The Minnesota Twins to induct Johan Santana to their Hall of Fame. »