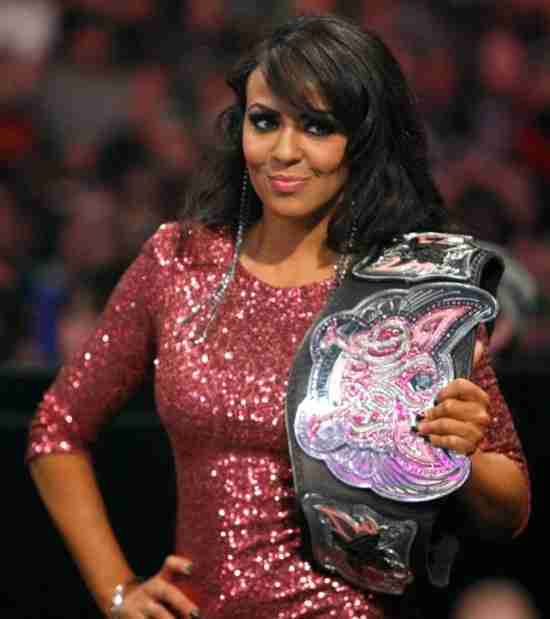 04 Aug
2015
Not in Hall of Fame
In between the deaths of WWE Hall of Famers, Dusty Rhodes and Roddy Piper, a former title holder in the WWE retired to little fanfare.

The winner of the 2006 WWE Diva Search and former WWE Woman’s Champion and Diva’s Champion, Layla El has announced that she will be retiring from professional wrestling at the age of 38.

The former England born Miami Heat cheerleader, did not make that much of a splash after debuting in the WWE, and really wasn’t focused much until she was moved to the ECW brand and was paired with Brooke and Kelly Kelly as “Extreme Expose”, a dance troupe who did get somewhat regular television time on the E’s third brand.  The group would disband and while she would wrestle on occasion but it was not until she was drafted to RAW where she would be able to show a little more of her personality.

It was shown initially with a pairing with Steven Regal and that heel persona would serve her even better on Smackdown where her pairing with Michelle McCool as “LayCool” was easily the highlight of both of their careers.

Layla’s retirement asks us this question…is she a WWE Hall of Famer?

Our gut instinct is that she is not, and while she is a former women’s champion and someone who helped change the ethnic makeup of the women’s roster, the fact was that she was just a passable wrestler and we are not even sure that she makes our top 300 list once we revise that in the upcoming year.

Wrestling fans, we would love to hear your take on this one!