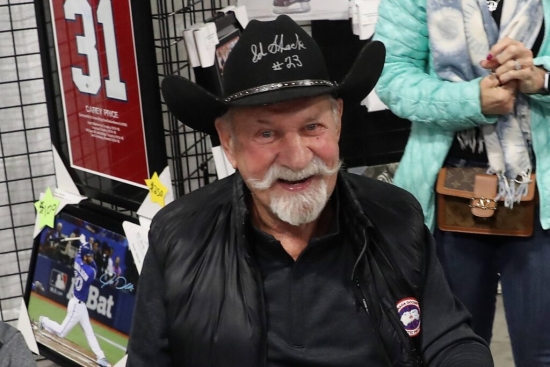 One of the most colorful figures in the history of hockey has passed away, as Eddie Shack died this morning at the age of 83 following a battle with throat cancer.

From Sudbury, Ontario, Shack broke in with the New York Rangers in 1958, but he was traded to the Toronto Maple Leafs in 1960, where he became one of the most popular players in the city.  Shack helped the Leafs win four Stanley Cup rings, and while he was not a skilled playmaker, he was a rough and tumble player known for his colorful and jovial nature.

Shack was so popular, that a Canadian garage band named the Secrets wrote a song called “Clear the Track, Here Comes Shack”, that went to number one in Canada.  Shack’s career extended until 1975 where he also played in Boston, Los Angeles, Buffalo and Pittsburgh.

After his playing career ended, “The Entertainer” was a national spokesman for the Pop Shoppe and Schick.

We here at Notinhalloffame.com would like to extend our condolences to the friends, fans and family of Eddie Shack.

Kirk Buchner, "The Committee Chairman", is the owner and operator of the site.  Kirk can be contacted at [email protected] . Email This email address is being protected from spambots. You need JavaScript enabled to view it.
More in this category: « David Stern to enter the Women's Basketball Hall of Fame RIP: Mark "Rollerball" Rocco »