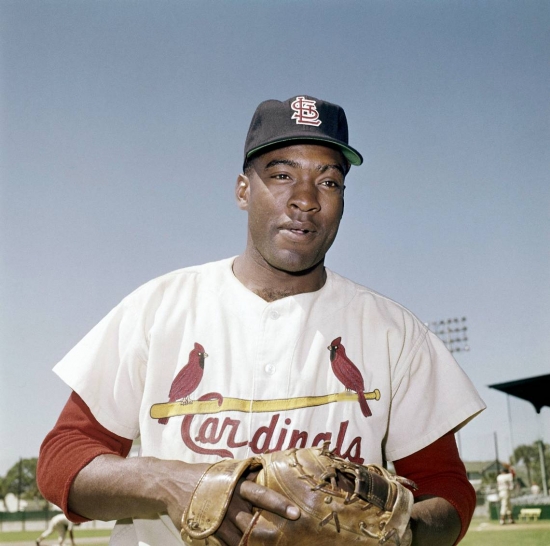 Regular visitors of Notinhalloffame.com know that we are slowly working on the top 50 of every major team in the NHL, NBA, NFL and MLB. Once that is done, we intend to look at how each team honor their past players, coaches and executives.  Eventually, we plan to do that for the major colleges in the NCAA.  As such, it is news to us that the St. Louis Cardinals has announced that Tom Herr, John Tudor and Bill White were chosen for their franchise Hall of Fame.

Herr and Tudor were elected via the fan vote.  They beat out Keith Hernandez, Edgar Renteria, Steve Carlton, Lee Smith and Matt Morris to earn this honor.  White entered by the Red Ribbon Panel, which was created for players from an earlier era.

John Tudor, Pitcher (1985-88 & 1990).  After the 1984 season, John Tudor was traded from the Pittsburgh Pirates to St. Louis, and the southpaw proceeded to have the best season of his career.  Tudor finished second in Cy Young voting after going 21-8 with a 1.93 ERA and a National League leading 0.938 WHIP.  Tudor was a huge reason that the Cardinals won the Pennant, and Tudor won his first two starts, losing the third against Kansas City.  Tudor had a 62-26 record for the Redbirds.

Bill White, First Base (1959-65 & 1969).  An All-Star in five of his years in St. Louis, White was a member of 1964 World Series Championship Teams.  Playing at First Base, White was considered one of the best defensive players at that position, and he won six of his seven Gold Gloves as a Cardinal.  White had two top-ten MVP finishes and as a Cardinal had 1,241 Hits, 140 Home Runs and a .298 Batting Average.

The Cardinals Hall of Fame came into existence in 2014, and has quickly become one of the best franchise-run Halls of Fame.

We here at Notinhalloffame.com would like to the impending members of the St. Louis Cardinals Hall of Fame.