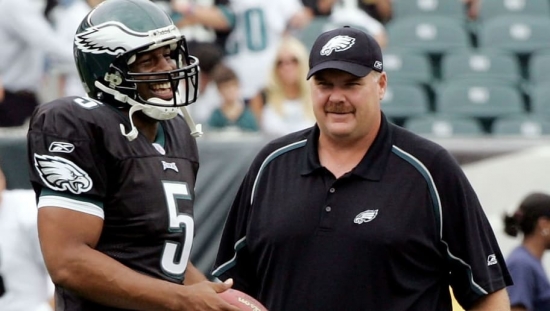 We have seen a lot lately of Donovan McNabb and his plight for the Pro Football Hall of Fame, from Terrell Owens simply saying “Who?” when asked about McNabb and McNabb himself comparing his stats to Troy Aikman and saying that he is a Hall of Famer.

McNabb’s candidacy has been much aligned by critics and fans and even on our site, he has not received a lot of support.

He does, however, have a great fan for his potential Hall of Fame bust in his former coach Andy Reid, who had this to say:

“Listen, I’m his biggest fan. I was there. I know he belongs there.  You talk about the great players in the National Football League? Five championship games, a Super Bowl? All those things? Good football player. Great football player, and did some things that weren’t being done at that particular time in a lot of areas. I think the world of him.”

Reid makes a lot of good points, but they seem to have gone on deaf ears in terms of the Pro Football Hall of Fame.  McNabb has yet to be a Semi-Finalist and based on history it does not seem that he will be chosen this year.

Either way, we will be paying attention.