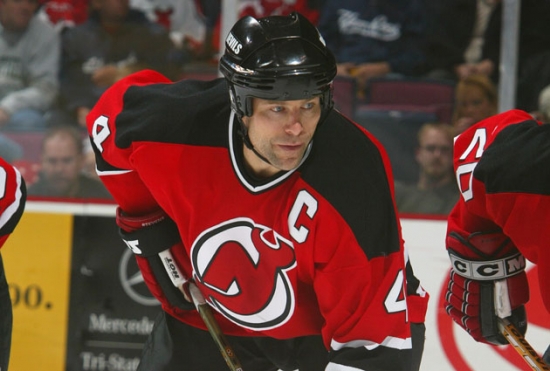 While Martin Brodeur was ranked at #1, we can argue that the Devils run as a Stanley Cup contender truly began with the signing of Scott Stevens.

Stevens arrived in a unique circumstance, as he was compensation for the St. Louis Blues signing Restricted Free Agent Brendan Shanahan in September of 1991. It turned out to be a coup for the Devils, as the team would develop a neutral zone trap, and the hard-hitting Stevens would become a team leader he didn't want to play for.

The Defenseman would stay with the Devils until he left the sport in 2005, and he was a Second Team All-Star in his first year in New Jersey.  His best year came two years later, where he led the NHL in Plus/Minus (+53) and Defensive Point Shares (6.9), and he had a career-high 78 Points.

The Devils instituted their lockdown defense after that year, which made it harder for Stevens to score, but the heavy hitter adapted to the system, and would help them win three Stanley Cups.  Individually, he was still able to add two more Second Team All-Stars, and he won the Conn Smythe as the playoff MVP in 2000.  Stevens may not have won a Norris, but as a Devil, he had ten top-ten finishes, including a second-place finish in 1993-94.

Stevens was inducted into the Hockey Hall of Fame in 2007, a year after the Devils retired his no.4.