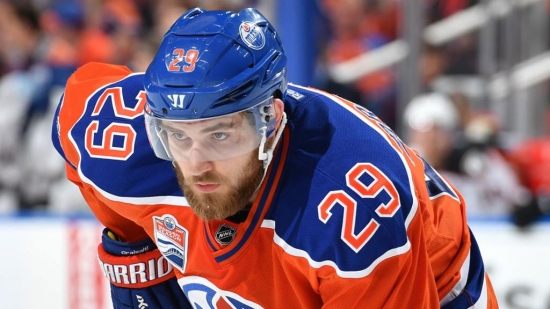 As we are writing this, Connor McDavid is the star of the Edmonton Oilers, but Leon Draisaitl is right there with him, and his skill set is growing.

The son of former German National Team Player, Peter, Draisaitl, Leon made history as the highest drafted player who was born and trained in Germany when the Oilers took him 3rd overall in 2014.  He didn't do much in his rookie year, scoring only 9 Points in 37 Games, but he would accrue 51 in 2015-16 and followed that with a pair of 70 Point campaigns.  Last year (2018-19), Draisaitl exploded with 50 Goals, 55 Assists, and 105 Points, which were numbers that placed him 2nd, 9th, and 4th respectively in those respective metrics.  He would also go to his first All-Star Game and would lead the NHL in Shooting Percentage.  Draisaitl's game elevated to an elite level in 2019-20, where he won the Hart Trophy and Art Ross Trophy, becoming the first German to win these awards.  He would also win the Pearson Award.

If the Oilers land some strong deep playoff runs and Draisaitl continues his ascension in hockey, he will not only rise on this list but the growing ladder of great German hockey players.