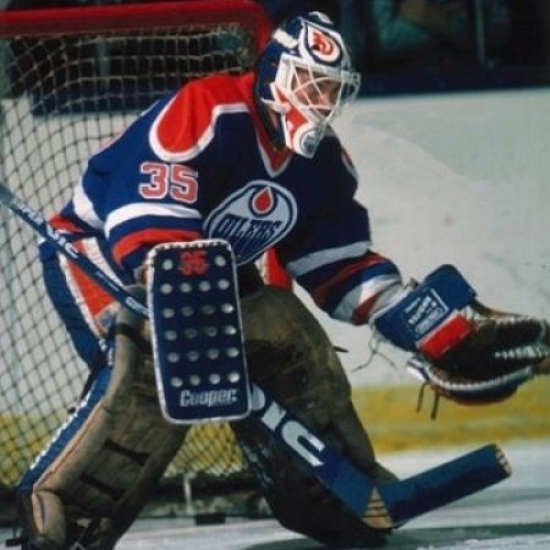 When you think of the goaltending of the Edmonton Oilers throughout the 1980s, Grant Fuhr is the first name you think of.  That is the correct answer, but Andy Moog had a lot of great moments in the pipes for Edmonton during that same era.

Moog was a 1st Round pick in 1980, and he would initially share the goaltending duties with Eddie Mio.  Fuhr would quickly emerge, and before long, they would create one of the most lethal netminding tandems in the NHL.  At different times, each Goalie was the star, and Moog himself was the primary Goalie when the Oilers went to their first Stanley Cup Final in 1983.  Moog would not see as much action in the playoffs (1984, 1985 & 1987) that Fuhr did, but he was a significant part of why the Oilers were successful and got there.

Moog would go to two All-Star Games as an Oiler and would finish in the top ten in Vezina Trophy voting four times.  His 143-32-21 record, regardless of how much offensive firepower was in front of him, is essential no matter how you look at it any lens.

His time with the Oilers ended when he was traded to the Boston Bruins in 1988, and he would go to two more All-Star Games.