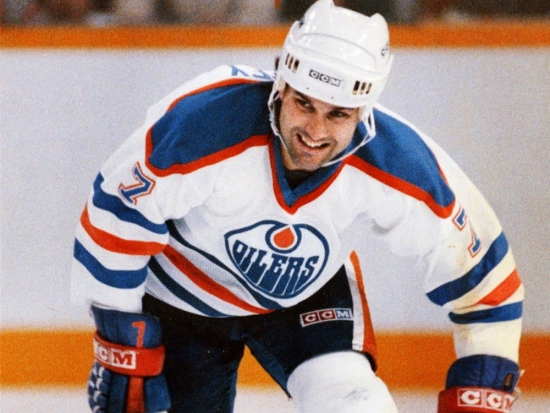 Drafted 6th Overall in 1980, Paul Coffey had a modest rookie season with 32 Points but would nearly triple that the next season with a 29 Goal and 89 Point campaign.  This year would earn him a Second Team All-Star Selection, which h would repeat in the next two seasons, and he would see his Points totals increase to 96 and 126, respectively.  In that 1983-84 Season, his 86 Assists made him the runner-up in Points as he was also the runner-up for the Art Ross Trophy.  Even more importantly, Coffey would help Edmonton win its first Stanley Cup.

Coffey would be named a First Team All-Star the next two seasons and was also the Norris Trophy winner.  In 1984-85 he would have 121 Points and in the season after he would have a career-highs of 48 Goals, 90 Assists, and 138 Points.  Coffey added two more Stanley Cups, and he was now regarded unilaterally as the top blueliner in the NHL.

Coffey would be the first major player of the Oilers’ dynasty to leave the team.  A financial dispute would see Coffey traded to Pittsburgh, and he would go on to win another Stanley Cup and Norris Trophy.  After Bobby Orr, Paul Coffey is the greatest offensive Defenseman in the history of the game, and in 2004 he would be inducted into the Hockey Hall of Fame in his first year of eligibility.