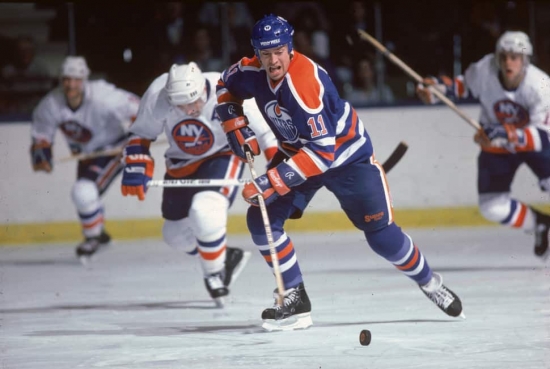 Much like it was easy to decree that Wayne Gretzky was the greatest Edmonton Oiler of all-time, we find it quite simple to state that Mark Messier is a firm number two for this list.  This is no small praise, as when you look through the top ten, there are many Hall of Famers who was responsible for the Oilers' dynasty of the 1980s.

Messier had played in the WHA for Indianapolis and Cincinnati as an underaged player, and when the league folded, he was eligible in the NHL Draft, where the Oilers selected (stole) him in the 3rd Round.  While he wasn’t adapting to scoring in the National Hockey League as Wayne Gretzky did, he was a physical two-way player whose offensive game would slowly blossom to among the best in the league.

In 1981-82 and 1982-83, Messier was a First Team All-Star at Left Wing, reaching the 100 Point mark in the latter campaign.  He switched to Center in the 1984 Playoffs, and he exploded from there, winning the Conn Smythe Trophy in what would be Edmonton's first Stanley Cup win.  Messier was now the leader of Edmonton's potent second line and would continue to score and win Stanley Cups (1985, 1987 & 1988).  When Gretzky was traded to the Los Angeles Kings, Messier established himself as an elite player, a status that anyone who was paying attention knew he already owned.

In the 1989-90 season, Messier would score a career-high 129 Points and would earn a First Team All-Star nod while capturing his first Hart and Pearson Trophy.  More importantly, he took the Oilers to their fifth Stanley Cup win, a feat he did without Gretzky.

Where Mark Messier will always be considered legendary is his leadership.  He is regarded as one of the greatest ever at motivating his teammates, and that began at the professional level with Edmonton.  After he was shipped off to the New York Rangers as part of the Oilers’ cost-cutting, he would win another Hart Trophy and end the decades-long drought by taking the Rangers to a Stanley Cup win in 1994.