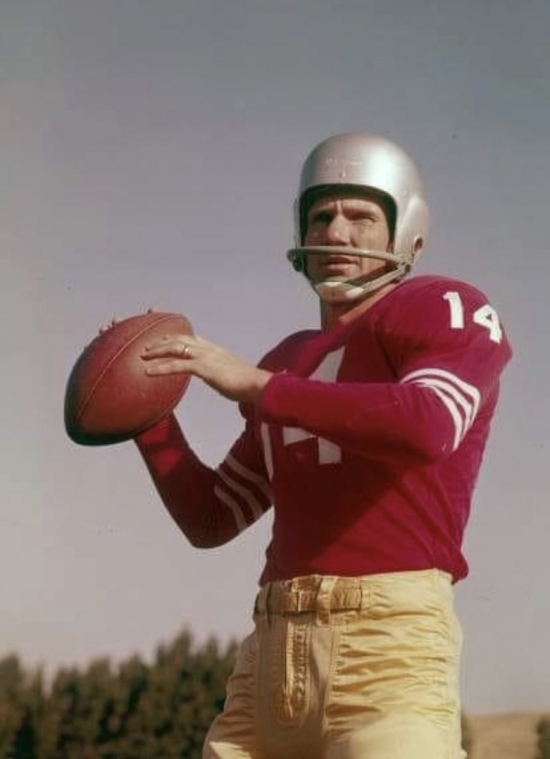 By today’s standards, the way Y.A. Tittle arrived to the San Francisco 49ers was unique. The LSU Quarterback was the Sixth Overall Pick in 1948 when the Detroit Lions took him, but he opted to sign with the Baltimore Colts of the AAFC instead.  Tittle did well, and the Colts were one of the teams that merged with the NFL when the AAFC merged with the NFL, but this first incarnation of the Colts was short-lived as the Colts folded after only one year in the NFL.  All of the Colts were made eligible in the 1951 Draft, and San Francisco took tittle Third Overall.

Tittle already proved himself in the Colts, but he was not San Francisco's permanent starter until 1953.  Tittle went to the Pro Bowl that year, and in 1954, and in 1955, he led the NFL with 17 Touchdowns (although he also was first in Interceptions (28).

It was in 1957 where Tittle had his best year in a San Francisco uniform.  The Quarterback led the NFL in Completions (176) and Completion Percentage (63.1), and he took the 49ers to the playoffs.  Tittle was a First Team All-Pro and was the UPI MVP.  The QB was a Pro Bowl selection for the fourth time in 1959.

Before the 1961 Season, Tittle was traded straight up for the much younger second year Guard, Lou Cordileone.  Both were offended that they were traded for each other, but Tittle was the one to be right, as he would be excellent for the Giants in the next three years, while Cordileone flamed out.

Tittle entered the Pro Football Hall of Fame in 1971. In 2009, the 49ers inducted him in their first franchise Hall of Fame Class.