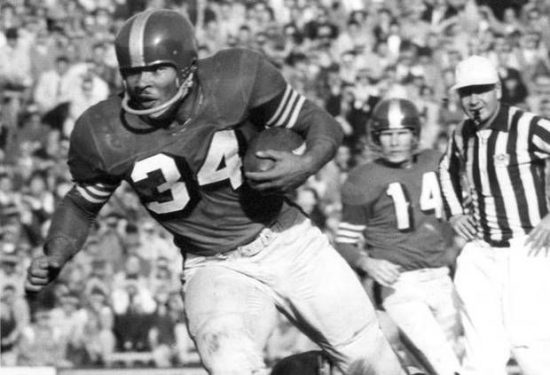 Joe Perry played football for the Naval Air Station Alameda, after a stint in the military, and despite being African-American in the 1940s and playing for a non-big-time school, Perry was highly scouted by both the NFL and the upstart All-American Football Conference.  Perry opted for the San Francisco of the AAFC over the Los Angeles Rams, and the Fullback became the first black player in team history.

As a rookie, Perry led the AAFC in Rushing Touchdowns (10), and did so again as a sophomore (8), while also finishing first in Rushing Yards (783).  The 49ers and other AAFC teams merged with the NFL, and Perry remained a dominating force. Now paired with Running Back, Hugh McElhenny, and Quarterback, Y.A. Tittle, San Francisco had their "Million Dollar Backfield," which was among the best in the NFL.

In 1953, Perry, who was coming off his first Pro Bowl, had another while leading the NFL in Rushing Yards (1,018), Rushing Touchdowns (10), Yards From Scrimmage (1,209), and Touchdowns (13).  Perry was named a First Team All-Pro, and the United Press called them their MVP, the first time a black player won a version of the MVP.  The following season, he made history as the first player to have a back-to-back 1,000 Yard Rushing season (1,049), and he again led the league in that stat and YFS (1,252).

While that was the highlight of Perry's career, he remained a viable option for the 49ers through the rest of the decade. After a poor 1960 season, Perry was traded to the Baltimore Colts, where he played for two years before being traded back to San Francisco for one year before retiring.

Perry would total 10,194 Yards From Scrimmage with 79 Touchdowns as a 49er and would enter the Pro Football Hall of Fame in 1969. San Francisco retired his no.34 in 1971, making him the first of two players to earn that honor, and in 2009 he was an inaugural member of their franchise Hall of Fame.