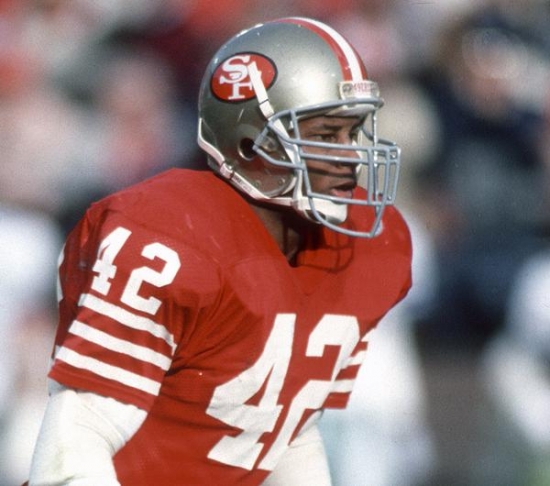 In the 1980s, The San Francisco 49ers were a high-octane team known primarily for their stars at Quarterback (Joe Montana) and Jerry Rice (Wide Receiver).  However, if you are going to be blowing teams out, that means your defense was holding down opponents, which San Francisco did in the 80s through the leadership of Ronnie Lott.

Lott was a National Champion at USC, and he was able to stay in California when the San Francisco 49ers captured him with the Eighth Overall in the 1981 Draft.  It was a perfect fit and had it not been for the offensive bias that exists in the NFL (and really all sports), he would have been the recipient of even more attention than he got.

Lott became the second first-year player to net three Interception Return Touchdowns as a rookie, and he was a First Team All-Pro while helping the Niners win their first Super Bowl.  Lott remained the star Defensive Back for San Francisco throughout the decade and was considered one of the best in the game.  Had it not been for a player named Lawrence Taylor, Lott would have been the Defensive Rookie of the Year.

Lott played at Left Cornerback in the first five seasons of his career, going to the Pro Bowl in the first four.  The former Trojan would also notably lead the NFL in Tackles (68) in 1982, and he helped San Francisco win their second Super Bowl in 1984.

After the 1984 season, Lott moved to Free Safety, and he was just as effective.  Lott led the league in Interceptions in 1986 (10), and in both '86 and 1987, he had 20 in Approximate Value, the latter year being lead-leaguing.  Lott again anchored the 49ers defense to two more Super Bowl wins and accumulated 51 Interceptions overall for the team.

Before the 1991 Season, Lott joined the Los Angeles Raiders and played four more years before retiring.

Lott would enter the Pro Football Hall of Fame in 2000, and he is also a member of the 1980s All-Decade Team, and the 75thand 100thAnniversary Team.  His no. 42 was retired by San Francisco in 2003, and six years later, the 49ers Hall of Fame made him an inaugural member.