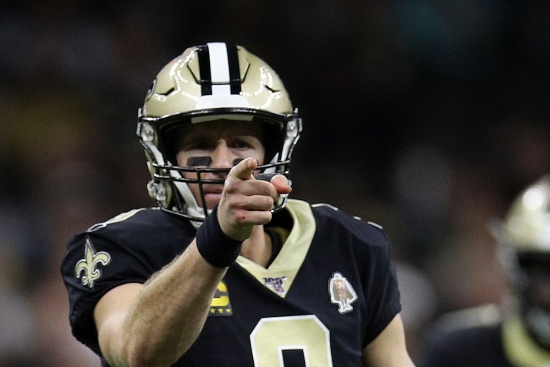 Drew Brees played the first four years of his career with the San Diego Chargers, but after they drafted Philip Rivers, Brees became expendable.  Brees was also coming off shoulder surgery, and many teams were a little gun shy about signing the former Purdue Boilermaker.  He did, however, have offers, and he signed with the New Orleans Saints before the 2006 season.  That decision turned out to be the best for both parties.

We are entering 2020, and Drew Brees is still the Saints Quarterback, and what he has done for the Saints and the city of New Orleans is impossible to quantify.  He shed any immediate fear about his shoulder in his first year there, with a Pro Bowl and a first place finish in Passing Yards.  These stats were especially impressive considering New Orleans was suffering from the aftermath of Hurricane Katrina, and it was their first year back as they were unable to play in Louisiana during the '05 season. Brees was not just a Saint but was the face of the city and a community leader.

Since the time he has been a Saint, Brees has always been considered among the top five in NFL Quarterbacks.  In the Big Easy, Brees has been to the Pro Bowl twelve times, has been a First Team All-Pro once, a Second Team All-Pro four times, led the league in Passing Yards seven times and Passing Touchdowns four times.  More importantly, Brees took New Orleans to a win at Super Bowl XLIV, a feat even more impressive considering that the Saints were almost at the point of relocation.   It is not unrealistic to state that had Brees not signed with the Saints, and we might be calling them a completely different team right now.

Injuries would take their toll on Brees in 2019 and 2020, and while he was still a productive player, he hung up the cleats after the 2020 season.  At the time of his writing, Brees was the all-time leader in Passing Yards, and was second in Touchdown Passes, most of which was accomplished as a Saint.

We can’t imagine that any other player will take over the number one spot on this list any time soon.