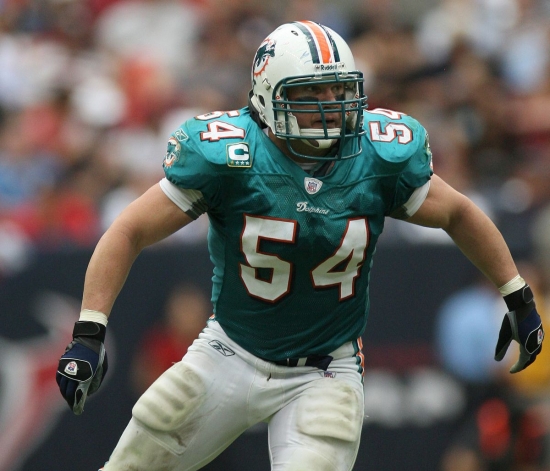 Zach Thomas came to the Miami Dolphins as a fifth round pick from Texas Tech, and he would prove to be the most dynamic defensive player that Miami ever had.

Playing at Linebacker, Thomas was an All-Rookie in 1996 who had 156 Tackles.  Playing in the middle, Thomas built upon that rookie campaign as a tackling phenom, where from 1996 to 2006, he was always in the top ten in Combined Tackles, never having less than 128 in a year.  He would finish first in that vital statistic in 2002 and 2006 and was in second place twice.  Thomas also finished in the top ten in Approximate Value twice.

In terms of independent awards, Thomas filled his trophy case.  A seven-time Pro Bowl Selection, the former Texas A&M Aggie would be a five-time First Team All-Pro and two-time Second Team All-Pro while also winning NFL Alumni Linebacker of the Year twice and was selected to the 2000s All-Decade Team.

Thomas was with the Dolphins until 2007 when he was released, and he played another year in the NFL for the Dallas Cowboys.  He signed with the Kansas City Chiefs in 2009 but did not make the team after suffering a concussion.

While Thomas's professional football end was not spectacular, his career with Miami certainly was.  He tallied 17 Interceptions, 19.5 Sacks, and 1,640 Tackles as a Dolphin.