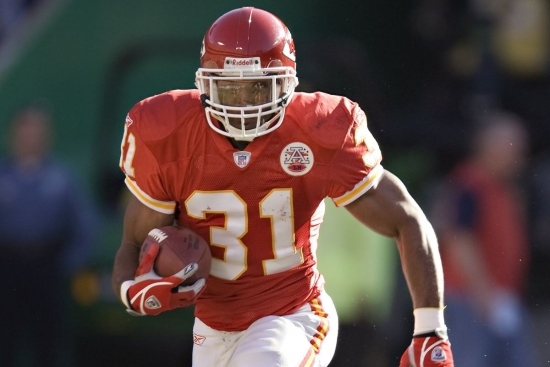 Priest Holmes had a 1,008 Yard rushing season for the Baltimore Ravens in 1998 however in the next two seasons he did not get past 600 so it was safe to say that Ravens fans may not have been that concerned when he signed with the Kansas City Chiefs before the 2001 season.  As it turned out they would have been wrong.

Priest Holmes would become one of the best Running Backs over the next three seasons.  He would win the Rushing Title with 1,555 Yards and was also the league leader in Yards From Scrimmage.  It would mark the first of three straight Pro Bowl and First Team All Pro Selections.  Holmes did not win the Rushing Title again, but his 2002 and 2003 seasons were arguably better.  Holmes would lead the NFL those seasons in Approximate Value and would rush for 1,615 and 1,420 Yards, but he increased his Rushing Touchdowns from 8 in 2001 to 21 and 27 the next two seasons.  He would also catch 70 passes those seasons and again go over 2,000 Yards in Yards from Scrimmage, the 2002 season campaign being an NFL leading 2,287.

In 2005 midway through the season a tackle from Shawn Merriman caused an injury to his spinal column and it cut short what should have been another monster season.  He would not be able to play in 2006 and his return in 2007 did not result in a lot of on-field success and he retired shortly thereafter.

Comparatively speaking, Priest Holmes did not play as many games as others on this list but his explosive seasons at the top of his field warrants him a high spot on this list.