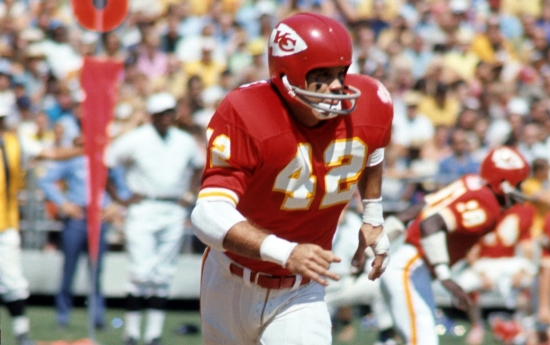 Johnny Robinson is arguably the greatest Safety in Kansas City Chief history though he did not start his professional career that way.

Robinson was drafted as a Halfback for the inaugural season of the American Football leagues’ Dallas Texans and as a Flanker, he accrued over 1,800 Yards from Scrimmage in his first two seasons.  Robinson would be moved to Safety the following year and he would help the Dallas Texans win the AFL Title in 1962.  He would stay with the team when they relocated to Kansas City, and his defensive prowess began to blossom.  Robinson was named a First Team AFL All-Pro every season from 1965 to 1969 and would be a First Team All-Pro in 1970 in the NFL following the merger.  The product of LSU would lead his respective league in Interceptions twice (1966 AFL, 1970 NFL) and he would secure 57 picks overall in his career.

His best performance took place in Super Bowl IV where he helped the Chiefs win the game with a fumble recovery and an interception.  Robinson actually had a pick in each of the three AFL Championship Games he played!  Robinson was one of the early inductees into the Chiefs Hall of Fame, receiving the call in 1974.

He would finally enter the Pro Football Hall of Fame in 2019 as a Senior Candidate.