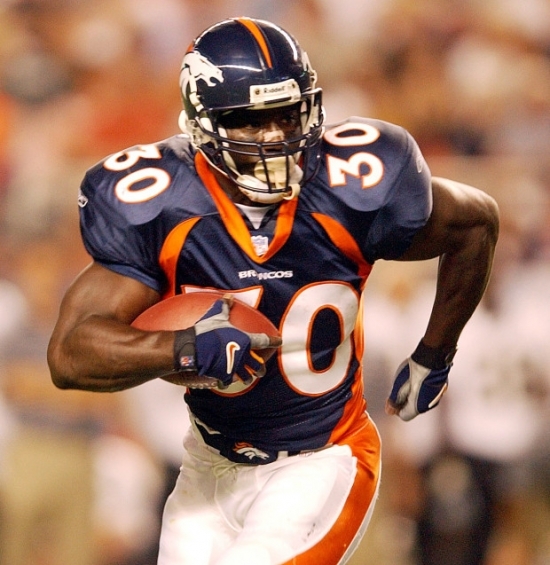 Nowadays, it is expected that if you don't accumulate at least 10,000 Yards as a Running Back that a Hall of Fame slot won't likely come your way.  That line of thinking wasn't much different in the late, and early '00s, but then most Running backs never had a three year stretch of dominance like Terrell Davis did.

Terrell Davis was only drafted in the Sixth Round, but he impressed so much in training camp that he would start and would become the lowest selected player at the time to have over 1,000 Yards as a rookie.  That was a good 1995 but his next three seasons would become legendary.

In 1996, T.D. rushed for 1,538 Yards with 13 Touchdowns earning him a spot on the First Team All-Pro roster and had established himself as an elite Running Back in the NFL.  1997 was even better as he climbed to 1,750 Yards and had a league-leading 15 Rushing Touchdowns.  Davis was the Running Back John Elway needed to put them over the top, and the two future Hall of Famers took the Broncos to a Super Bowl XXXII win.  He would rush for 153 Yards and three touchdowns and be named the Super Bowl MVP.  Davis actually had a better season in 1998 where he had NFL leading 2,008 Rushing Yards and 21 Rushing Touchdowns and again won the Super Bowl.  That would be his last postseason game, and he rushed for 1,140 Rushing Yards for 12 Touchdowns.

Sadly for T.D. he suffered a severe injury the following season and was a wreck the next three years before he had to retire early, but the dominance he showed in the late 1990s is what legends are made of.

Davis entered the Pro Football Hall of Fame in 2017.