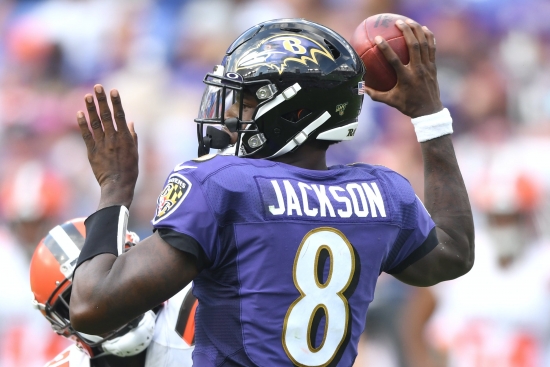 Is it too soon to rank Lamar Jackson this high?

Lamar Jackson was the last pick of 2018 First Round, and everyone knew it was only a matter of time before he took over for Joe Flacco at Quarterback.  That happened in the middle of his rookie year when Flacco went down to injury and the former Louisville star became one of the most exciting players in the National Football League.

Jackson closed off the season with a 6-1 record, taking the Ravens to the playoffs and becoming the youngest QB to start in the playoffs.  The Ravens lost, but Jackson was a star.

In 2019, Jackson had the greatest season ever by a Ravens Quarterback.  Jackson took the Ravens to a 14-2 record and led the league in Passing Touchdowns (36) with 3,127 Passing Yards and only 6 Interceptions.  On the ground, he was electric with 1,206 Rushing Yards, 7 TDs and he led the NFL in Rushing Yards per Attempt.  The Ravens did not make it to the Super Bowl, but his season was so good that he won the AP MVP, PFWA MVP, and the Bert Bell Award.

Jackson was not an MVP or Pro Bowler in 2020, but he was still the most exciting player of the year and had his second consecutive 1,000 Rushing Yard Season.

While there are only three seasons under his belt, the sky is the limit for Jackson.