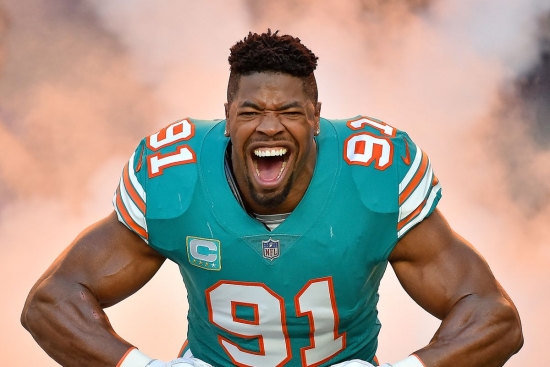 Despite playing for a college juggernaut like Penn State, Linebacker Cameron Wake was not drafted in 2005.  He signed with the New York Giants as a Free Agent, but failed to make the team, but he continued to work out and hope for an opportunity, but it took a detour to Canada to get him to the NFL.

Wake made the B.C. Lions in 2007, and in the next two seasons, he was named the CFL Most Outstanding Defensive Player in both of them.  The NFL could not ignore that, and he signed with the Miami Dolphins, who were one of several teams interested in the former Nittany Lion.

Wake was a back-up as a 27-year-old NFL rookie, but he became a regular starter on the edge the year after and was one of the top pass-rushers over the next nine seasons.  Going to five Pro Bowls, Wake was a First Team All-Pro in 2012, and he had five 10-plus Sack years, peaking with 15 in 2012.

Age caught up to Wake, and his final season in Tennessee (2019) was sub-standard compared to what he did before, but he accumulated 100.5 Sacks, an incredible accomplishment considering when he made it to the NFL.

Should Cameron Wake be in the Hall of Fame?