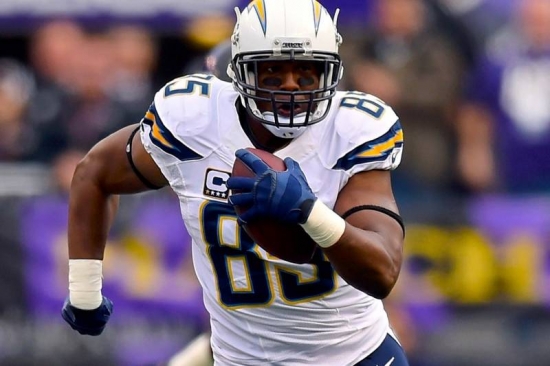 Antonio Gates was a dual sports star in high school in football and basketball and would play the latter at Easter Michigan, The College of the Sequoias, and at Kent State.  He was not drafted in the NBA, but despite not playing football in college, his agent arranged a pro football tryout with the San Diego Chargers, who would sign him as an undrafted free agent.

Gates made the team at Tight End, and as a rookie, he would record 24 catches, which again was phenomenal, considering that he was not even playing college football the year before.  While he seemingly came out of nowhere, he was then prognosticated to have a breakout season in 2004.  Gates shattered the hype, and he would begin an eight-year streak of Pro Bowl Selections, with the first three seeing him named a First Team All-Pro.

Also making the Second Team All-Pro twice, Gates would have nine seasons where he would have at least 800 Yards, and four years of 10 Touchdowns.  Gates played with the Chargers until 2018, and he left the game with 955 Receptions, 11,841 Receiving Yards, and 116 Touchdown Receptions, all of which are franchise records.  He would be named to the 2000's All-Decade Team.

Should Antonio Gates be in the Hall of Fame?