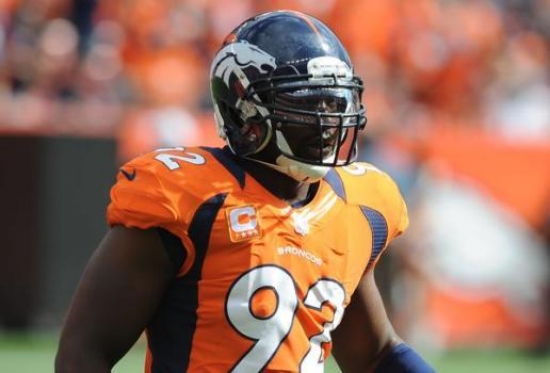 Easily the best professional player named Elvis, Elvis Dumervil set a standard that will make it hard for other “Elvi” to follow.

We know that was a goofy way to start this entry but Dumervil was a very good player.  Drafted by Denver in the fourth round in 2006, Dumervil did not see much action as a rookie but in his second season he was a starter that would accrue 12.5 Quarterback Sacks.  That was good, but the Defensive End would top that in 2009 when he had 17 Quarterback Sacks (leading the NFL while earning A First Team All Pro Selection.  A torn pectoral muscle kept Dumervil out of 2010 but he returned to go back to the Pro Bowl in 2011 and 2012.

He would sign with the Baltimore Ravens in 2013 and the following year he would be chosen for his second and final First Team All Pro as he matched his previous Sack total with 17, though this time he would not finish first in the NFL in that prime defensive statistic and had to settle for third.  Dumervil would be a Pro Bowler one final time in 2015 (his fifth) before joining the San Francisco 49ers for one final season in 2017.

Should Elvis Dumervil be in the Hall of Fame?