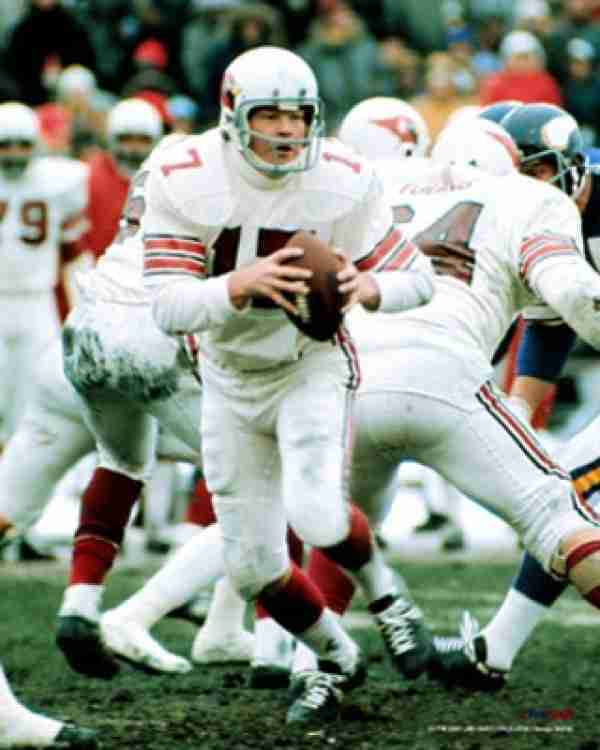 If it seemed like Jim Hart was the St. Louis Cardinals Quarterback forever it is because in football terms, he practically was.  Hart started 180 games for them from 1967 to 1983, but for such a long tenure it went largely unnoticed.  Playing for bad teams will generally do that.


It wasn’t that the Cardinals didn’t have any good seasons, as in the mid 70’s they rifled off three consecutive 10 win seasons.  This coincided with Hart’s four straight Pro Bowl appearances.  Jim Hart became one of the most durable and respected Quarterbacks in the NFL, and due to that durability, he was able to accumulate a very impressive career in terms of statistics.

Unfortunately, as the leader of bad teams for the majority of his career, Hart was considered a good player, who wasn’t good enough to take his team to the next level.  This may explain why he never received any real look from the Hall.

Should Jim Hart be in the Hall of Fame?

Should Jim Hart be in the Hall of Fame?

Clearly "Dr." Harry Maue and Wyatt Earp are the same poster. They have the same poor grammar and vocabulary; and, incoherent logic. What a gob - `The good doctor' HAHA! Can we remove his drivel?

Why don't you just admit it Harry?

Whoever you are, you are picking fights with a woman, who defends her father? 'If you came over to my house, etc.' You are not much of a man, are you? You probably are a nerd who never had any friends and tells tall tales. You say you are a Dr.? You write like you are learning disabled. If you are a Dr. then I have some swampland in Florida ...

Kattie- don't respond to guys like this - they are not worth your time.

The Truth!
Quote
-3 #3 Dr Harry J Maue 2013-04-04 19:50
Kattie, lighten up I am a huge fan of our dad's I went t all the games he played in my son Brad probably knows you if your one of the twins. That is way too much anger and complete misinterpret ation of my comment. If I was not such a big an of your dad's and you probably came over to our home my reponse would not be so polite. Maybe you were just having a bad day...Dr. Maue
Quote
+4 #2 Kattie hart 2013-02-21 00:20
What u think u know you don't know because my dad Jim hart was an announcer for one year in radio for the Chicago bears and dam happend to be my fathers business partner for years.I talk to my dad daily y'all talk all the crap u want but u don't know jack about my dad obviously you need to get the story straight before u start talking crap
Quote
-1 #1 Dr. Harry J Maue 2012-11-27 14:59
being on bad teams owned by an idiot should not affecr Hart's induction. Dan Dierdorf got in and they played on the sme bsd teams but Jim was not n announcer and no need to say more. he belongs in the Hall of Fame. Dr. Maue
Quote
Refresh comments list
RSS feed for comments to this post