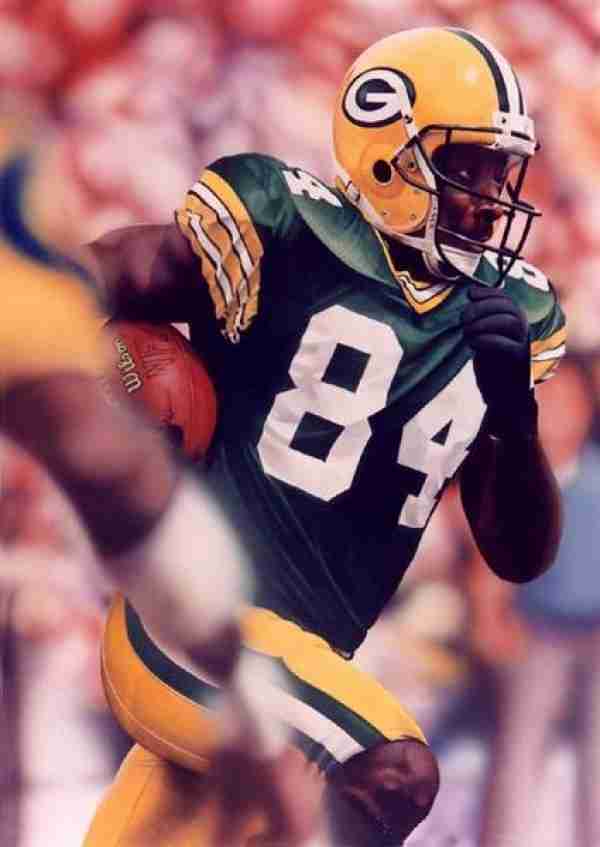 Much like our entry with Terrell Davis, we wonder what kind of career numbers Sterling Sharpe would have put up had a neck injury not prematurely ended his career in his prime in 1994.  It is not out of the realm of possibility to think that he could have in the top ten in every major receiving category had he stayed healthy.

Sterling Sharpe was productive in every year he was in the NFL.  Three times he led the league in receptions and was the main go-to target for Brett Favre when the latter joined the Packers.  His apex season was in 1992 when he won the Wide Receiver’s version of the “Triple Crown” where he was the top performer in receptions, receiving yards, and receiving touchdowns.  In joining that elite group, many felt that he was truly the top Wide Receiver in the NFL.
He was still at the top of his game when he was forced to retire at the age of 29.  Had he remained healthy, where would he be on all-time receiving lists and would he have made the Packers the dynasty?  We’ll never know.

Should Sterling Sharpe be in the Hall of Fame?

Should Sterling Sharpe be in the Hall of Fame?

-2 #6 NotEvenAPackerFan 2014-09-22 07:45
When you account for the fact that he played during an era where prolific receiving numbers were relatively rare, his career is truly impressive. The rule changes in '94 was a real turning point for receiving numbers, and Sterling never benefited from the evolution of the passing game. Just look at the numbers: he was putting up huge stats, particularly in receptions and touchdowns, during an era where nobody had ever heard of 100 catch seasons. I think we're all blinded by just how great Jerry Rice was: if Rice hadn't been playing, it'd be harder to overlook Sharpe's accomplishments.

#51 is way too low. Harrison, Bruce and Brown should be ahead of him, maybe Holt, but even then only by virtue of their longevity. As far as pure talent and impact are concerned, Sharpe was second only to Rice during his career, and alone ought to be enough to put him in the Hall.
Quote
+2 #5 NotEvenAPackerFan 2014-09-22 07:44
Sterling Sharpe is his generation's Gail Sayers: a top-shelf talent whose career was unfortunatel y cut short by injury. Compare their careers and even the longevity argument starts to look suspect. Sterling played 112 games to Sayers' 68. Sayers never lead the league in TDs at his position. Sharpe did it. Twice. And as a number one back playing in a run-first era, Sayers didn't have to rely on lousy QBs for his stats. Go look at the QBs for the Packers during Sharpe's career and his achievements start to look like the stuff of legends. In fairness, it's true that Sayers had the special teams dimension to his game. But the overall difference in treatment is hard to explain.

Sharpe, like Sayers, was 4-time First team All-Pro. To my knowledge, he is the only eligible offensive player in the history of the game to be selected first team All-Pro and not be in the hall.
Quote
0 #4 BigKev 2012-09-28 14:03
Sterling Sharpe should be in. He was the first receiver to have a 100 catch season. At the time he was injured, Jerry Rice was the only receiver better during that era.
Quote
0 #3 jimmy26 -0001-11-30 00:00
I think Sterling will get aq bump this year because of his brother' s HOF speech. its now or never for Sterling who should be in but like Ziggy says so should a bunch of other WR's
Quote
+2 #2 Committee Chairman -0001-11-30 00:00
Yep.....Zigg y, a typo. Fixed accordingly.
Quote
+3 #1 Ziggy Koole -0001-11-30 00:00
You said "much like Terrell Davis, we wonder what kind of career numbers SHANNON Sharpe would have put up..." Did you mean Sterling? Just notifying you of a typo. And while the Sharpe story is unfortunate, I think there are 8 receivers who should go in before Sharpe because they had better careers, not just more talent (Cris Carter, Tim Brown, Andre Reed, Cliff Branch, Drew Pearson, Harold Carmichael, Otis Taylor, Henry Ellard)
Quote
Refresh comments list
RSS feed for comments to this post