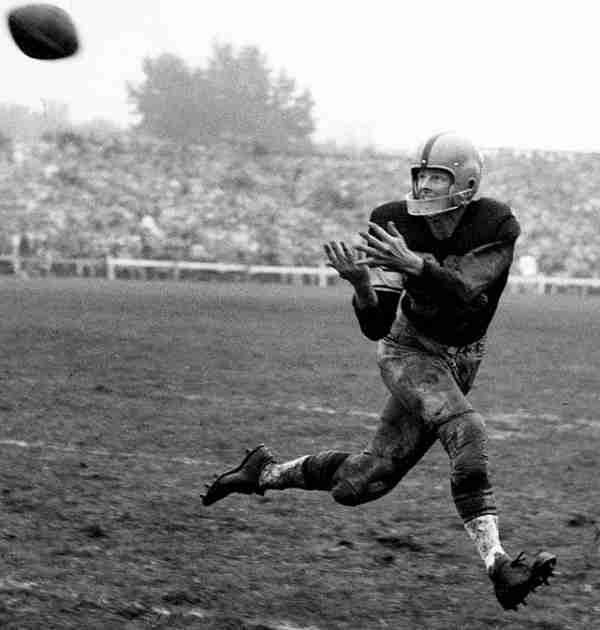 You would think that the All-Time Leader in NFL receptions would have been at least been a finalist for the Hall of Fame.  Of course, Billy Howton was the all-time leader when he retired in 1963.  He has dropped considerably since then.

Billy Howton was one of the top receivers for the Green Bay Packers throughout the 1950s.  He was a constant fixture for years in every receiving category and when he became the all-time leader in receptions and yards he took that slot from the legendary Don Hutson.


A huge force works against him as he was cast off from the Green Bay Packers when the most iconic figure in professional football, Vince Lombardi, arrived in the tundra.  Many speculated that if he wasn’t good enough for Lombardi, he can’t possibly be good enough for Canton.  That is a very powerful argument.

Should Billy Howton be in the Hall of Fame?

Should Billy Howton be in the Hall of Fame?

+2 #2 Robert 2012-07-14 18:25
His numbers are very close to Cliff Branch who is also on this list, only Howton did it 20 years earlier and on much worse teams. Lombardi cut players for lots of reasons, including one for hiring an agent. I'm not saying he should definitely be in, but he's got a lot stronger case than most receivers on this list.
Quote
+4 #1 Ziggy Koole -0001-11-30 00:00
Personally, I believe that if you are the best or one of the best for any length of time, you deserve to be a hall of famer. The fact that Howton played at the same time as Tom Fears, Elroy Hirsch, Dante Lavelli, etc. and put up better numbers than all of them, in my opinion, means that Howton is a hall of famer. I don't care if he never won a title, I don't care if he was cut by Vince Lombardi. Remember, OJ Simpson never won a championship and numerous stars were released by their original teams.
Quote
Refresh comments list
RSS feed for comments to this post