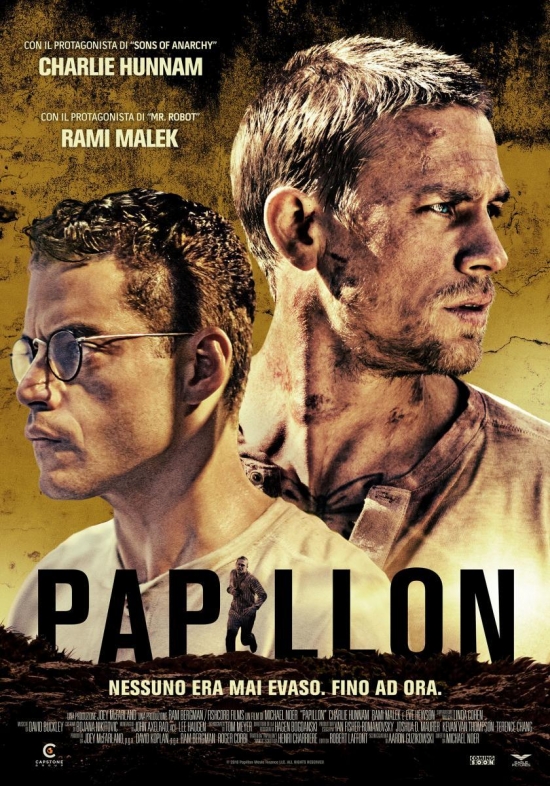 Well, it has been a few weeks since I have written a review as we were away visiting family. In that light, I decided to write two reviews from this weekends viewing. I elected to try a themed weekend by hitting remakes of movies that I had loved when I was younger. This is really easy these days as remakes (or re-imagining as they seem to call it) is all Hollywood does these days. Lack of originality permeates the industry of late…anyways, for Friday night I chose Papillon.

The original Papillon (1973) starred Steve McQueen, Dustin Hoffman and Anthony Zerbe. The original was amazing! I watched it sometime in the mid 70’s with my father and just loved the film. So much so, that we managed to find the paperback and read it as well. The book was also a fantastic piece of literature and I still remember reading it, some 40 years later. Steve McQueen (Papillon), was a force of nature in Hollywood at the time could not make a bad film! This film was right up there with “The Great Escape”, “Bullitt” and “The Magnificent Seven”, all phenomenal films and now considered classics. Hoffman also another fantastic actor did an amazing job as Dega. They could act, they had chemistry and they evoked emotions from the audience. With that in mind, I put in the latest version of Papillon (2017) into the blu-ray player and hunkered down to watch this remake.

Now, going into this film, I was not expecting greatness. Let’s be honest, it is not often that Hollywood can remake a classic and have it better than the original. As a matter of fact, I am having a hard time trying to think of a remake that was better. True Grit, did a fair job as well as the new franchise of “Planet of the Apes” (I am not talking the one with Wahlberg) Batman reboots were 50/50, as was Spiderman and Star Trek. But other attempts tend to fail miserably (i.e. Ben Hur, Amityville Horror, Around the world in 80 days and Arthur to name but a few).

The new version of Papillon stars Charlie Hunnam and Rami Malek (Papillon and Dega respectively) in the key roles of the film. Hunnam, know primarily of “Sons of Anarchy” is a fair actor with a spotty record for films. For every good one, there are 2 or 3 which are sub-par. But, having said that, I really liked him in “Sons of Anarchy”, so I was hoping for the best. Rami Malek on the other hand is a very talented actor with an increasingly respectable resume (Bohemian Rhapsody, The Pacific, 24, Night at the Museum (Franchise), Mr. Robot). Each role is demonstrating his versatility and his adaptability to roles that are new and unique to him. While neither of them are McQueen or Hoffman, they do a fair job.

For those few in the world who do not know what Papillon is about, here is a brief synopsis: Based on the true story and auto-biography of Henri Charriere (Papillon). Papillon is a thief who was set up for a murder he did not commit in October 1931 in Paris. He was subsequently sentenced to serve his time at Devils Island, a Penal colony in French Guiana. On the transport to prison Papillon (Hunnam) meets Dega (Malek), a forger who was also sentenced to life at Devils Island. Taking Dega (Malek) under his wing, Papillon (Hunnam) creates a bond of friendship that supports them both whilst incarcerated. Papillon (Hunnam) the shrewd and wily thief who knows how to live with the dregs of society, and Dega (Malek) the forger with enough money to ensure that they live as comfortably as possible while in jail. Papillon (Hunnam) has dreams of escape, and he requires the funding and assistance that only Dega (Malek) can provide. Thus creating the genesis of their friendship. After several attempts, with Dega’s (Malek) assistance, Papillon (Hunnam) does manage his escape from this dreaded island where he manages to pen his memoirs to tell the tale.

In a nutshell, that is the story. An older version of Alcatraz if you will. However, this biopic version, manages to skim over some of the more memorable or key elements of the original. While it was still enjoyable to watch, Hunnam is not McQueen, nor is Malek Hoffman. However, they do manage to pull of the roles with enough skill and talent to make this film enjoyable. The scenes and cinematography were well done and the chemistry between the main characters was believable. The dialogue was delivered with enough emotion/angst to make it believable in the key scenes, and there was enough historical accuracy in the settings/props to ensure that the audience did not get distracted. Additionally, the use of supporting actors/actresses were reasonably well done and added to the plot as a whole.

Charlie Hunnam’s as Papillon: Hunnam’s performance was OK overall. There was enough of his own style and character in the film to show the differences between this version and Steve McQueen’s representation of the same character. I must commend him for losing the weight to give him a gaunt appearance. The only mistake, is that someone who is was so supposedly so undernourished would not have the muscular definition that Hunnam did. As mentioned previously, I find Hunnam to be a bit hit and miss with the quality of his work. This one was more of a hit, vice the miss I saw recently in “The Lost City of Z”. The chemistry between the two main characters was unmistakable, and they managed to portray the bond that they developed very well. Again, not to the same level as the original, but still done well enough. Hunnam’s style of acting is often portraying the aloof, stoic hero. Sometimes it works (Sons of Anarchy) some times it doesn’t (Lost city of Z). However, in this film, the style fit and helped ensure that the character was believable. Overall, not a bad performance from Hunnam.

Rami Malek as Louis Dega: Malek was the true star of the film in my opinion. A very accomplished actor, he really made this film. Heck, he even sounded like Hoffman at times! He displayed fear, loyalty, anger, angst, and admiration like a flick of the switch. His unique look also adds to the film, and the general appreciation of the character. As I mentioned above, my wife and I both felt that the chemistry between the two principal characters were believable and ensured that our interest was maintained. Malek is really coming into his own, and we look forward to seeing him in future roles.

So in summary, were we entertained? Yes, we were. The film kept our attention and the characters, cinematography and direction provided enough to the audience (us) to keep watching. We didn’t even pick up the tablet or laptop while watching it, well not exactly true, we did grab them few times to check where we had seen a supporting actor/actress previously, but would put them down once the answer was found. Was this remake/re-imagining better than the original. Unfortunately, No. However, it was still good enough to ensure that our time was not wasted, and that we were entertained for a few hours. Would I recommend this film? Yes, if you are fan of Hunnam and Malek, then definitely check it out. Conversely, if you want to watch a superior production that tells the same story, then I would recommend the original with McQueen and Hoffman.

If you are interested in viewing other works with the principal actors, please consider the following recommendations.