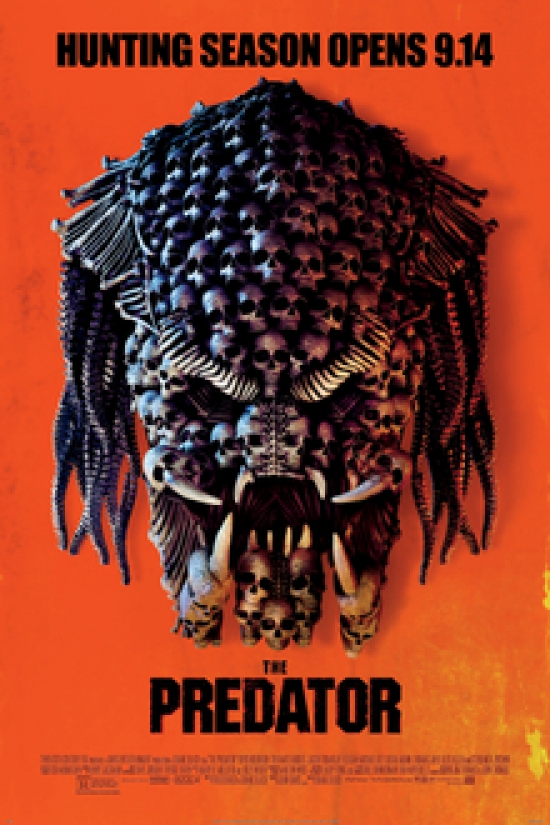 Aaah, another Friday night, another movie. Instead of NETFLIX or Amazon Prime, we went back to the pile of unwatched movies sitting in my home office. For this week’s selection, we put in “The Predator” from 2018. This is a tentative “sequel” to some of the other Predator films in the past. Now, the original Predator from 1987 was a cult classic. I distinctly remember watching the original in a theatre in Fargo North Dakota in ’87 while I was traveling cross country to my new posting on the west coast. The original was epic, with Schwarzenegger, Weathers, Duke, Ventura and Landham. They were huge personalities with bulging biceps to match. The film, while thin on plot was heavy on the action and the one liners…for example who can forget Ventura (Blain), when told he was bleeding, shrugging it off and saying, “I ain’t got time to bleed” before letting loose with his mini-gun. Or even better, when Dutch (Schwarzenegger) rips off the Predator’s mask and says, “you are one ugly Motherfucker!” These lines are ones that are quoted by others continually in pop-culture conversations. In my opinion, Predator was near the apex of Schwarzenegger’s best films, (to include Terminator (1 & 2), Commando, Running Man and True Lies) … after those, his films went downhill. Weathers, still on the glow from his role as Apollo Creed in Rocky was still on a career high, provided the balance to Schwarzenegger, and did help with the plot (a bit), or what we could call the plot for the original.

The original spawned a weak sequel and then merged the two universes with Aliens to provide a bevy of other b-rate sci-fi films. Now, lets take a look at the latest venture into the Predator universe. Now, while this version stars a pretty good cast, they are unfortunately misused and left to fend for themselves, hopefully to find better roles in the future to help save their careers.

What is this latest piece of fecal matter about? Well, the film starts out with two spaceships in battle, one of them escapes into a wormhole (I think) and ends up over Earth. Crashing into the jungles of Mexico, this new Predator is hunted down and eventually captured. The original team sent to hunt him down gets massacred, well except for their officer, Quinn McKenna (Holbrook). As a result of the battle, McKenna (Holbrook) takes the helmet and some other toys from the Predator and ships them home.

At “home” his parcel is delivered from the PO Box to the residence of his ex-wife, Emily (Strahovski) and son Rory (Tremblay). The boy, who is mildly autistic opens the box and plays with the helmet. This results in him inadvertently calling the mothership of the aliens and having them come to Earth to find the “Predator” that has crashed and become subsequently captured by a super secret US military team. (Aren’t they always super secret…very clichéd here I must say).

Meanwhile, Mckenna (Holbrook) has been captured by the US Military and is being transported on a bus with other soldiers who are, shall we say, just a little off centre? Each of them have their own mental issues that they are dealing with, and this new cast of characters try to be humorous, but primarily fail in this endeavour. Concurrently, we now meet Casey Brackett (Munn), a scientist who has been called up by the Government to assist with identifying and analyzing the captured Predator. This whole scene seemed to me to be a blatant rip-off from The Sphere and the scene where they get the characters played Dustin Hoffman, Samuel Jackson and Sharon Stone to come to the “super secret” installation to study the alien sphere. This felt almost identical to me, even though it had been a number of years since I had watched that film.

Brackett (Munn) examines the Predator, makes some sarcastic comments, and discovers that this new Predator has some human DNA merged within the creature. At this moment, the creature awakens, kills everyone horribly (except Brackett (Munn) and Traeger (Brown)). Brackett (Munn) escapes the carnage and follows the Predator outside with a tranquilizer gun in hand. Miraculously, Brackett (Munn) is now a fully trained soldier and demonstrates abilities with weapons and tactical situations. She ends up hooking up with the busload of miscreants, by which I mean all the soldiers who were on the way to the military psychiatric centre.

McKenna (Holbrook) finds out that this creature is looking for his lost items which he had shipped home and is now in possession of his ex wife and son. Convincing them all to help him, Mckenna (Holbrook) leads this rag-tag bunch of misfits to pursue and save his family from the both Predators. Apparently, the 2ndPredator is on the scene and he too wants to capture the boy, as he is now mysteriously capable of reading their language and also able to use all the technology. There is a long fight between all the characters, cheezy one-liners, and in the end, the child and ex are saved, find new lives, and McKenna and son are working for the government, all accomplished with the minimal loss from his new suicide squad.

That is pretty much the story in a nutshell, nothing original, very clichéd and I can’t even say following the standard formula as they seemed to have lost the recipe for a good action flick. Even though the actors are actually really good in their own right, the script, character development and general outline was horrible. What I found extremely interesting was that the Director, Shane Black was in the original Predator as one of Schwarzenegger’s squad of elite soldiers. He should have stayed in that role, as a director and also writer of the script, I really found him to be lacking in the key elements for writing and directing a good film and story.

Now to take a look at the actors in this farce;

Boyd Holbrook as Quinn McKenna: Holbrook plays an elite Ranger Officer who is the principal star of the film. I have only really started noticing Holbrook since I saw him in “Narcos”. He is pretty good there, a solid actor with a good delivery of lines. In Narcos, he can either play a dramatic or action role, depending on the circumstances. However, in “The Predator”, I find his character lost. His dialogue is weak (not his fault) as well his character development. Unfortunately, not one of his best roles and I look forward to seeing him in films of the same calibre as Narcos and Gone Girl.

Trevante Rhodes as Nebraska Williams: as one of Mckenna’s new squad of soldiers, I found the character of Nebraska Williams to be somewhat entertaining. A botched suicide attempt is what garners him a spot on the bus of ne-er do wells, but he still portrays a solid character and emotes the aura of a professional soldier who may have made some mistakes. I have only seen him in a few other films (12 Strong, Bird Box) and he seems to be moving along in his career, however, I hope being associated with this film does not harm his career to much.

Jacob Tremblayas Rory McKenna: Tremblay is actually a pretty talented actor. I had first seen him in Room, and thought, wow, this kid is gonna go places. Now I see him in this…well, he was not the worst part of the film at least. His portrayal of a child with autism was ok I guess, and his character was pretty much the lynch-pin for some of the story arc. He did ok, but I am sure that there are much better roles out there in his future.

Keegan-Michael Key as Coyle: a rising comedian, Key is now in many of the films and shows that I have watched of late. His character of the “goofball” in this suicide squad was pretty much standard acting for him. He did not really have to stretch to make this character, so it was no real surprise. I preferred him in “Friends from College and Let’s be Cops” but he was ok here. Nothing stand-out, just ok.

Olivia Munn as Casey Brackett: For me, this was the biggest disappointment in casting. Munn is a talented actress who effectively plays the “pretty, sarcastic intelligent woman”. While “Brackett” in this movie is still more of the same, it was just the dialogue, and scenes written for her that I found her lacking. For example in Newsroom, she is very intelligent, with a dry sense of humour that carries her throughout the program. Here, it just doesn’t mesh, one minute she is a scared scientist, the next she is a female version of Rambo. Where did she learn her fighting skills and use of weaponry? All of a sudden, she is handed an assault rifle and she knows exactly what to do. Her character, while actually important to the story line could have been written a lot better.

Sterling K. Brown as Traeger: Another disappointment for us. Brown is a very talented actor who is making a huge name of late, especially in “This is us”. As the key bad guy who is trying to find the kid, the predator and control the world, his character basically sucks. It is one dimensional with limited development. As his career has spawned an impressive resume, I don’t think his participation in this film will harm him in the long run.

Thomas Jane as Baxley: This character was complete nonsense. As one of McKenna’s squad of malcontents, he was right out there, and his character was comical, and not in the good way. Jane is a talented actor who has carried a series (Hung) supported others (Expanse, Texas Rising) and starred in numerous films. In this film he is now relegated to 4th or 5thrate status. I really hope that he manages to recover from this…as his character was horrible.

Alfie Allen as Lynch: What was this character about, did not do much except fly a helicopter at a key moment. In Game of Thrones, Allen was a character that you would love to hate. In this film…who is he? Well, as a minor supporting role, this movie should not damage him too much in the grand scheme of things. Hopefully we will see him other roles similar to what he played in GoT in the near future.

Yvonne Strahovski as Emily: Another huge disappointment for me, after watching her last month in Stateless and being a fan of her in Chuck and Dexter, she is now doing a role like this? Man, she had a few dozen lines, that were delivered almost in a mono-tone and extremely emotionless. Good thing we had seen her in other shows that demonstrated her true talent, and did not judge her by this role.

Overall, as you can see we were not entertained. As a matter of fact, 10 minutes into the film, my wife picked up her tablet and started shopping on Amazon. I stayed through the film, as I was desperately hoping that somewhere along it could be salvaged, but alas I was mistaken. Would I recommend this film, no, not really, even if you had two hours to waste, I would consider other programs/films besides this one.

If you are interested in GOOD programs staring the key actors, please consider the following: