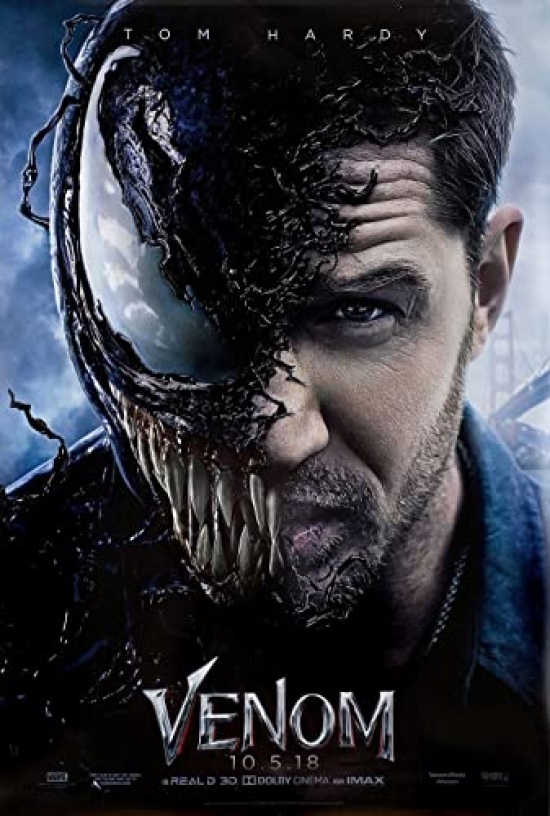 Our home town is currently in the middle of a heat wave with temperatures in excess of 40 degrees Celsius (with humidex). These high temperatures have made us all hide indoors. While hiding away from the heat and humidity we still managed to get a movie in. For this week, the next movie in the stack of unwatched films is “Venom” (2018). This film stars Tom Hardy in the title character and he is supported by Michelle Williams and Riz Ahmed and a lot and I mean a lot of CGI special effects.

“Venom” is another one of those films which centres on the anti-hero and origins of a character. The title character, Venom, originally introduced in Spiderman comics and movies is brought forward in a new spin and a new universe for this film. While still part of Marvel, it has managed to not tie itself down with other variants of the character(s) or previously storylines. In fact, the only other character that you can see from other versions is the standard Stan Lee cameo in the film. All the rest are new versions/aspects of the characters.

So how is this version laid out you ask? I will give a synopsis of the film without trying to give out too many spoilers and leave the climax and some key surprises for you to discover if you choose to watch this film. The film starts out with a spaceship from “Life” corporation breaking up on re-entry. Carried within it’s holds are some canisters with a previously unheard of life form. After the spacecraft crashes, one of the canisters breaks open and the animated slimy slinky moves to look for a host, and subsequently takes over an EMT who is on the scene to provide medical support to the astronauts. While this takes place in the far-east, we don’t really see this character too much through most of the film, except to see it take over other humans and make its way to Los Angeles. I guess, these ET’s are completely familiar with flying and have a detailed knowledge that California is the centre of the known universe. But I have digressed from the plot. Concurrently, we are introduced to the title character played by Tom Hardy. In his human form, if you will, we find that Eddie Brock (Tom Hardy) is a you-tube news reporter who has several hard hitting video-blogs on topical events. He is engaged to Anne Weying (Williams) and is rebuilding his career from a screw up in New York (Really the only other Spiderman/Venom reference, and I had to look that up to catch it). While in his new life, as a You-Tube news anchor (or something to that effect) he is tasked by his boss to interview the new multi-billionaire entrepreneur Carlton Drake (Ahmet), who is kind of an Elon Musk eccentric type of character. Lots of smart people around him and lots of money to spend. The difference is that this guy (Drake) is kind of crooked and will stop at nothing to get his own way, even if it is a loss of life.

This all comes too light when Brock (Hardy) sees an email sent to his fiancée about Drake’s company and their human experiments. While reading this email, Brock finds out that in order to get Drake’s pharmaceuticals to market he tested on humans with tragic results. As Anne (Williams) is an attorney for Drake’s (Ahmet) company “Life”, this email outlined the suit that was being laid against him for wrongful experimentation and loss of life. Using this knowledge, Brock (Hardy) ambushes Drake during the interview which leads to his termination and his fiancées job as well, and ultimately end with them breaking up as a couple.

Adrift in the morass of San Fransisco, Brock (Hardy) searches for a new meaning in life when he is confronted by Dr. Skith (Slate) a scientist working for Drake at “Life”. She tells him of these canisters that are filled with these slimy slinky things that she calls a parasite. Thinking that Brock (Hardy) is the only person who may be able break the story. This is even more important to her, as Drake (Ahmet) is now trying to merge these parasites with humans, all homeless people. Unfortunately, she witnesses that all of the test subjects have died horribly and she cannot take it.

Convincing Brock (Hardy) to help her, Dr. Skith (Slate) sneaks Brock (Hardy) into the lab where he becomes unknowingly becomes merged with the parasite called “Venom”. This parasite melds with Brock (Hardy), and proceeds to take over when required. Specifically, to fight for their preservation. We discover that these entities were seeking to take over the Earth, by means of the Life corporation. However, Venom grows to like the planet and his host Brock (Hardy) and they develop a partnership that almost reminded me of Riggs and Murtaugh in Lethal Weapon. Meanwhile, the long lost parasite has come to San Francisco and finds Drake (Ahmet). Leaving the old host, the parasite (Riot) then merges with Drake (Ahmet) to become a new symbiotic creature. The sole goal of this newly merged entity is to launch the next “Life” Rocket and retrieve the remaining millions of parasites from a comet. Once obtained, the craft is to bring them back to Earth, thus enabling their takeover.  Venom/Brock feel that they are the only ones who can stop this invasion and fight the Drake/Riot creation to an exciting climax.

Before going into the “entertained” portion of the review, lets take a quick look at the main cast.

Thomas Hardy as Venom/Eddie Brock: For me, Hardy is difficult to pin down. I will either find his roles excellent, or not care for them at all. For example, in the movie Legend where he plays twin brothers. I could not stand the film or him in it. However, in other films like Dunkirk, The Revenant, Mad Max: Fury Road and even the light film This means war, I found his characters to be really good and I enjoyed all the films mentioned. In Venom, he plays 2 characters again and carries it off with style. His version of Eddie Brock, a burnt-out do-gooder, but still loveable loser was enjoyable to watch, specifically the conversations that he had with himself as Venom we found especially entertaining. His style of physical acting was also put to the test in this film as he had to perform some very active and adventurous scenes, Hardy managed to complete them all with style and in a believable fashion. Even his vocal mannerisms fit the character(s) aptly and he managed to hid his UK origins admirably. The only fault in this role is that we found he lacked chemistry with Weying (Williams), but that might not be his fault, but that of the director/co-star/writer themselves.

Michelle Williams as Anne Weying: I personally found this character pretty boring and one dimensional. There was no spark with this character, I don’t know if it is the fault of the actress or the role/dialogue created for her. Her only real contribution to the plot was to be the means for Brock (Hardy) to learn of the class action suit against Drake and his company. Other than that, it was pretty useless and could have really been written out. While Williams has been touted as a great actress, she is not one of my personal favourites and I tend not to like many of the movies where she has too much of a lead role. Whether it is just her, or the roles she undertakes, I am not certain. But looking at her filmography, I must say that the movies that I have seen with her in them, I have tended to forget her participation and remember the others far more.

Riz Ahmed as Carlton Drake/Riot: I really liked this character, Ahmed does a great job of portraying a uber rich, narcissistic douche bag. There is nothing in his role that would make me like individual portrayed, thus showing the skill in which he acted him out. His own desires were at the forefront. He would take any means necessary to achieve his goals no matter what the cost either financially or in the terms of people. Nothing matters but his own wants. Once merged with the parasite “Riot” these emotions/desires were amplified just as much as his strength, thus creating a really good character that was actually a joy to watch.

Actually one surprise for me at the end (post credits) was when Brock/Venom (Hardy) visited the jail. The first surprise was to see Wade Williams as a prison guard (Who else but him could be the prison guard (think Prison break) a role that he has mastered over the years. He escorts Brock/Venom to a cell where low and behold, one of my favourite actors, Woody Harrelson as Cletus Kasady is interned. Kasady (Harrelson) provides some excellent dramatic foreshadowing for the sequel (Which I will definitely see if Harrelson is part of the project).  His 30 second screen time was great as usual, and I do look forward to the sequel to see how he takes this role further!

How did we find this film? Were we entertained? Yes, we were. I for one, always enjoy this type of film, my wife on the other hand can take them or leave them. I know she considers it “ok” if she puts down her laptop or tablet and starts watching the film without asking too many questions. In this film, after about 20 minutes she put them down and watched it along with me. The acting was not “Oscar” worthy or stellar. It was the CGI that actually stole the film. We found it to be the key enabler, and it made the film really worth watching. There have been cases in films where the CGI can actually detract the audience from the film or events, but in this case, I would say it was in harmony with the actors, and when present would shine. The dialogue was iffy, and the acting and chemistry were actually inconsistent at times, but this is a comic-book popcorn movie, Oscar performances are not what you are there for. You are there to watch the action and escape for an hour or two. In the case of Venom, it fit the bill. Would I recommend this film? Yes. Especially if you are a Marvel fan and have enjoyed the whole franchise and the comic books. This was a good spin on the character and it was a pleasant diversion.

If you are interested in other films also starring the principal actors, please consider the following recommendations:

Michelle Williams          All the Money in the World, Shutter Island, Manchester by the Sea