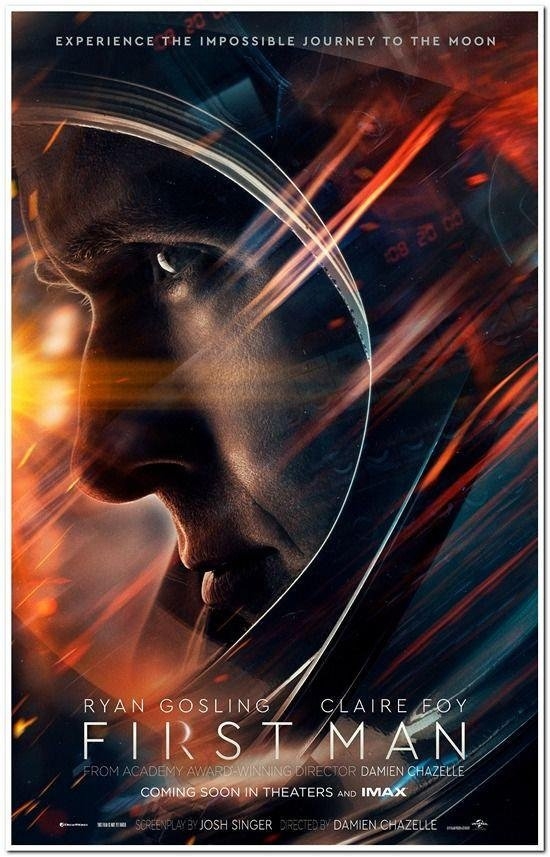 After having a busy week looking for a new vehicle, we finally got a chance to put in a movie on Saturday night. For this week’s selection, or ok, next in the pile… is “First Man”. This film is a biopic of the first man on the moon, Neil Armstrong. “First Man” has a solid cast and tells the extraordinary journey of mankind’s foray into space, which culminated in the fantastic achievement of landing on the Moon. Ryan Gosling plays the title character (Neil Armstrong) and is supported by a great cast of actors/actresses.

Does “First Man” live up to the hype and billing as advertised? Yes, and no. My wife and I always enjoy films that are based on a true story, person, and/or event. Primarily, as we have found that Hollywood is continually churning out variations of the same plot all the time, and if it is a true story. We kinda know how it is going to end beforehand. We just want to see how the film will depict it, and if it was worthwhile to spend the 20 bucks for the ticket, or blu-ray. “First Man” while a good movie, about a historic event, is not a great movie if you know what I mean. The cinematography was excellent in the launch/space/flight scenes and at times almost took your breath away. The Director (Damien Chazelle) expertly interspersed file footage with film footage to make you feel like you were watching it for the first time! The scenery, props, costumes etc were first rate. Being a child of the 60’s I remember many of the items fondly and it brought me a back to a simpler time, where my only responsibility was to pick up the toys (If I got around to it) and make sure I finished my dinner. However, I have just digressed, the props and supporting materials were excellent and fit the scenes and era. I looked for some out of place technology while watching and could not find any. (Not saying that there wasn’t any in the film, just that if there was, I did not see it). However, I did find the characters to be wooden and unemotional for most part and lacked chemistry between them, especially Gosling and Foy.

I have read that Armstrong’s children stated that Gosling and Foy portrayed an accurate portrayal of their parents, however, I found the on-screen presence of these actors lacking. Also, some of the integral portions of their lives were missed. We know that their daughter is sick and sadly passed away, but it was not really mentioned why. There were other holes in their own life that seemed to be missing, also, why were not the other children included in more scenes, as this was about him (Armstrong) would there not have been a little more of his family life? Additionally, why did the director not include the flag planting ceremony on the moon? We see it up in later scenes, but not when he actually planted the flag. I also read that this was a conscious decision by the director, but I firmly believe that this is an important scene that should have been included. Is the movie about Armstrong or NASA and the race to the moon? In either case, I believe it should have been included as it was important to both the agency and the individual. Also, I believe that the backstory of Armstrong should have been included more, even though he was a civilian within NASA, he was a former Navy pilot…easily could have been mentioned or alluded to. These aspects were missed.

This biopic only takes a small portion of Armstrong’s life. Basically starting with a test flight on Bell X-15 where Armstrong (Gosling) experiences technical difficulties before returning to land, and then culminating on the historic landing on the moon. Even if you are not a history buff, the average person will be aware of the first Moon landing and have heard the names Neil Armstrong and Buzz Aldrin. So really not much to add to that synopsis.

As you may have garnered, while I liked the film, I found that there were aspects that could have been better. Primarily, portions of the story line and the chemistry between the main characters. While I am on the subject of the actors, lets take a look at some of the main ones.

Ryan Gosling as Neil Armstrong: Gosling, a young Canadian actor who is making a name for himself with certain films, delivers (in my opinion) a very wooden and unemotional performance. There were so many aspects of the mans life that should have generated far greater tension or emotion than what was portrayed. However, if, as I have read, this is an accurate portrayal of the man himself, then so be it. But it did make the film seem slow at times, and almost drag on. Personally, I am not a fan of Gosling’s films as I find he always portrays pretty much the same type of character, and the film choices he has made have not actually been my type of films. I even found Blade Runner 2049 to be a slow film, and I was a huge fan of the original. Additionally, there was very little chemistry between Gosling and Foy. The bond that would be between such individuals who experience such hardships and time apart would be more evident then what was portrayed.

Claire Foy as Janet Armstrong: Continuing with the above thoughts, I found Foy’s portrayal of Janet Armstrong to also be wooden and unemotional. I enjoyed her in “The Crown” as Queen Elizabeth, but here it was just slow. Even at times of tension I could not get the feeling from her that it was tense and emotional. She is not the queen here; she could give more to the role.

Jason Clarke as Ed White: I like Clarke as White, he can easily play an astronaut, crooked politician, scientist or soldier. I first noticed him in the series Brotherhood, and as time went along he has been part of the cast of many more films that I liked, i.e. Zero Dark Thirty, White House Down, Dawn of the Planet of the Apes and Everest to name but a few. He easily fit into this role and the scenes with him were well done. As this is a historical film, his contributions were vital to the storyline and interaction within the film.

Kyle Chandler as Deke Slayton: Chandler always gives a solid performance in any film or show that he is part of, “First Man” is no exception. As with Clarke as White, as a historic film his contributions are integral to the story, and ensured that factual continuity was pretty much maintained. When on screen, he was value added and actually managed to convey intensity or emotion when required.

Corey Stoll as Buzz Aldrin: Every time I see Stoll on screen, I immediately can’t stand him. Either he is extremely talented, and picks roles that bring out the worst in him, or he really is that way. Either way, I cannot find a part or character in his resume that I liked the character portrayed. I actually had to stop the film to make sure that he was playing Aldrin. I had seen Aldrin on several shows and documentaries and he did not come across as such a douche. Regardless, Buzz Aldrin was a key character in the first landing on the moon, and maybe a bit more screen time and interaction between the two men would have been better for the film. If there was tension between the two, demonstrate that further, if they were buddies, give the audience that feeling. As it stands, because Aldrin was played by Stoll, and he came across as a bit of egomaniac and ass-hat, I could not get the feel of what the real person was.

Lukas Haas as Mike Collins: He actually had very minimal screen time in this film, and his only contribution was to play Collins. I am fully aware that most people only remember Aldrin and Armstrong, but Collins was part of the team and could have received at least some character development. He was pretty much a cardboard cut-out and the few lines he utters in the film could have been relegated to someone off screen. While historically Collins has a great deal to contribute, in this film, Haas was found lacking.

Pablo Schreiber as James Lovell: while Schreiber did not have much screen time, minimal dialogue and was most often seen as part of the ensemble, I found that I could not associate him as James Lovell. As Hanks had played Lovell in Apollo 13, that is what he looks like to me, and now that he looks more rugged, 5 inches taller and more of an action actor, he did not fit the character that most people will now associate with the real individual. Not really an issue, but when a lesser known actor plays a role that was already represented by an iconic actor, he or she will have some pretty big shoes to fill, and will undoubtedly fail in that representation.

Overall, we found the movie entertaining, though not necessarily due to the characters or the acting itself. It was the subject matter, cinematography, attention to detail of the era that drew us in. While you would think that this film is an action film as well as a biopic, it was slow and long. Especially as there are only a few scenes of intensity throughout this film, and while awesome, it was almost too little, too far apart. The opening sequence was amazing, as well as the launch and landing. Everything else was very slow. Would I recommend this film? Yes, if you have 2 ½ hours to kill and were looking for some authentic shots and great cinematography. But, if you want a more entertaining tale of the journey to the moon, check out The Right Stuff and Apollo 13. Both films had far greater tension and action than the First Man.

If you are interested in other films or shows by the key actors/actresses. Consider the following recommendations.