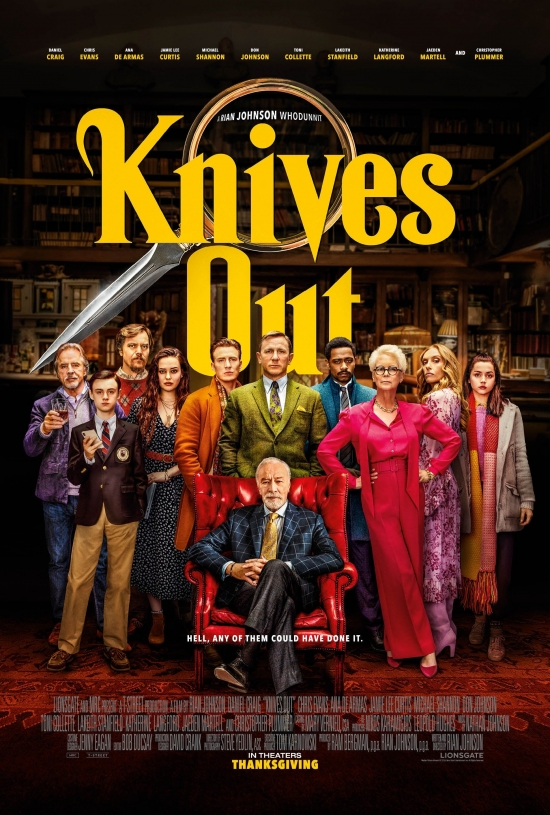 This week was a little change from the norm; instead of putting in one of the blu-rays that I had bought over the years and still had not watched, we decided to go to the movies. This was primarily due to the fact that we had some free passes! Now, as I have mentioned previously, my wife and I are retired, so we are on a “fixed income” so when we get free passes, we hoard them until such a time that we find something worthwhile to watch on the big screen at the Cineplex!

We looked at our passes the other day and realized that they would be expiring at the end of the year, so we decided to put them to use. After some careful consideration on what was playing at the various theatres and watching the trailers, we decided on Knives out! Usually when we pick a movie at the cinema, we always try to get something with lots of action, special effects, gratuitous violence and explosions. I was voting for either Ford vs Ferrari or the latest Terminator, but as with all relationships, we had to compromise as my wife selected Knives Out. I looked at the cast, all stellar, with strong credentials, so why not?

We arrived at the cinema for the matinee, and were much surprised to see a large number of cars in the parking lot, especially for mid-week! After getting our tickets from the automated kiosk, spending a mortgage payment to buy a couple bags of pop-corn and pop, we went to the designated cinema. Much to our surprise, there were several hundred people in there, and the usher advised that all the other cinemas were empty, and everyone came to see this movie! A very good omen to the film.

As you can see from the above cast list, Knives Out has a stellar cadre of actors, starting with Christopher Plummer (Harlan Thrombey) who plays the patriarch in this film. A murder mystery writer who had created characters and mystery’s so vivid that he became extremely wealthy. Naturally (as this is a film) his family is living off of his wealth in one-way shape or form, and his only true friend in his golden years has been his nurse Marta (played by Ana De Armas). The film starts out with Harlan’s (Plummer) apparent suicide at the conclusion of a family party that he had hosted.

While this appears to be an open/shut case of suicide to the investigating officers, a visiting private detective of renown, Benoit Blanc (Daniel Craig) who had been hired by an anonymous benefactor to discover the truth joined the police to discover what had actually happened.  As we follow the investigator, Benoit, the truth is revealed by peeling off the layers and veneers of all the family members, and giving the audience more twists and turns then a Snake and Ladders game.

Not wanting to present any spoiler’s on the plot, believe me, when I say that throughout the film, the audience is led down one path, only to find out that they should have went right instead of left while trying to deduce the truth.

What did we like about the film? Everything! Excellent set, cast and script. Benoit (Craig) does an amazing job as the private investigator in search of the truth. His style, very reminiscent of Benedict Cumberbatch in “Sherlock” or Kenneth Branagh in “Murder on the Orient Express”, Benoit (Craig) will keep you glued to the screen. His character is entertaining, smart, and funny and you will enjoy the ride as you follow him from discovery to discovery, and ultimately to the final truth.

The remaining cast is phenomenal as well; Jamie Lee Curtis (Lynda Drysdale), is the daughter of Harlan (Plummer), while a self made businesswoman, she feels that her father’s success should be transferred to her. This former “Scream Queen” has aged well and still delivers solid performances. Her husband, Richard Drysdale (Don Johnson), is a slimy, condescending a..hole, who looks down on everyone, while actually thinking that he is doing the right thing. He, like his wife, feel that they are deserving of the wealth and influence the family name has, and demonstrates a great deal of greed. While not really one of my favourite actors, he has come along way since playing Sonny Crocket on Miami Vice, and in this movie, he did it well.  Their son, Ransom Drysdale (Chris Evans) represents the spoiled son and grandson. Evans does well in this film, well enough in fact, that you tended to forget the iconic figure (Captain America) that he has been known as recently, and watch him portray the self-centred rich kid well.

Michael Shannon (Walt Thrombey) as the son, and manager of the family publishing house gives a strong performance. While usually portraying roles of intensity or giving a stoic delivery, he is impassioned in this film and also gives out an aura of weakness, something that he does not usually portray.

Ana de Armas (Marta Cabrera) was new to me, as the personal nurse to Harlan (Plummer) and his only friend and confidant, did an amazing job in her role. For a relative new comer when compared to the rest of the cast, she held her own, portraying the right amount of tension, emotion and/or gravitas when needed. Excellent overall.

The cast is rounded out by Toni Collette, (Joni Thrombey - gold digging daughter in-law), her daughter Katherine Langford (Meg Thrombey) and the police inspectors Lakeith Stanfield (Lt Elliott) and Noah Segan (Trooper Wagner). Everyone provided key parts to the plot and helped it progress along.

The only thing that we did not like with the film was the accent that Craig used throughout, we felt that it would have been more suited to an origin from New Orleans, then the southern drawl that it was supposed to have been, but that could be just our interpretation of his accent

Overall this is an outstanding film, it engages the audience, makes them think while entertaining them at the same time. As mentioned previously, hints of Sherlock and Hercule Poirot are present while Benoit (Craig) solves the mystery and provides you (the audience) with the clues that you might have missed or disregarded while watching the film. We enjoyed it immensely and will watch it again once it moves from the big screen to the one of the streaming services!