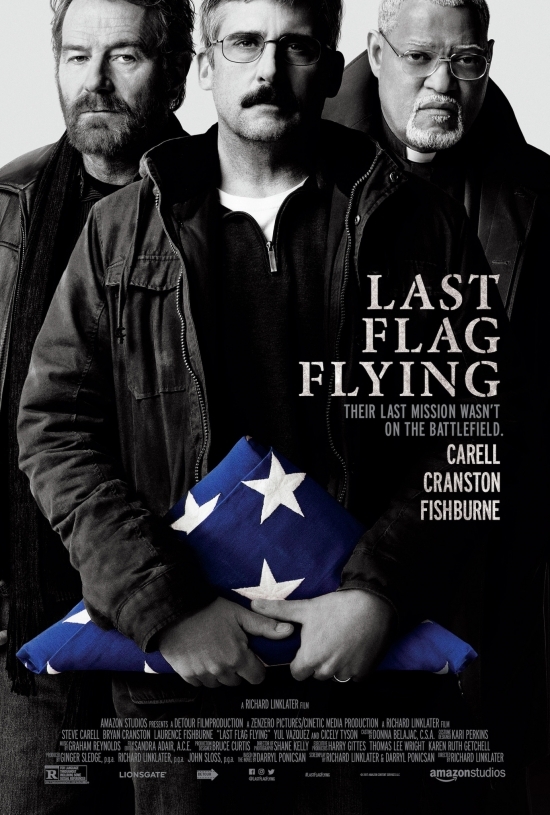 Another weekend has passed and another review to write. We actually watched two movies this weekend, one that I will not even bother to review (Mama Mia: Here we go again) was pretty dismal, but as my wife likes the music, and the scenery is nice we sat through it. Needless to say, for the main characters their talent (in singing) has not improved over the years, and with the addition of Cher as the Grandma, and how they photo-shopped her and other cast members to make them appear younger….well, I don’t think I have seen so much plastic in a film or one place since the Corvette show I saw awhile ago, but this movie is about “Last Flag Flying” not “Mama Mia”!

Subsequently, we tried, “Last Flag Flying”. My wife and I are both veterans, having both served in Afghanistan as well as the arctic to name but a few places. We both had a lot of trepidation before watching this movie, as we have seen far too many Ramp Ceremonies (Note: A Ramp Ceremony is when fallen comrades are escorted to the aircraft to be repatriated home, and the whole base (who are available) attend to pay their last respects), not to mention funerals back home for our comrades who have lost their lives either during operations or unfortunately afterwards. So needless to say we were unsure, but with the cast of Cranston and Fishburne, we were hoping for some quality entertainment.

In short, to summarize the plot; Cranston, Fishburne and Carrell all served together in Vietnam, and when Carrell finds out that his son has been killed in Iraq, he finds his former comrades (Fishburne/Cranston) and requests that they help him retrieve his son and attend the funeral at Arlington with him.

While we are not a big fan of Carrell, as we tend to find his roles all similar for the most part, and the few times that he did stray from them was when he was most effective (to us at least). In this movie, while he may have centre position in the covers and get top billing (probably more alphabetic vice role), his raison d’etre was that of the glue that brought the other two together.

The movie starts out with Carrell entering a non-descript bar. Just by looking at the interior you can tell a vet owns it, this is primarily due to the preponderance military memorabilia hanging about; The Navy ball caps, military pictures etc  and of course the bartender (Cranston) regaling the sole patron with his opinions and tall tales. Now from a personal standpoint, I can safely say that Cranston is pretty much living what many servicemen have dreamed of for years, owning their own bar. I can’t remember all the times when we were young and deployed somewhere, when one of my buddies would say that we should open a bar, and how awesome it would be. Naturally, we were always 3 sheets to the wind at that point, so it was always a great idea, and then we would plan and discuss on what it would be called, the theme…all decisions and ideas were made with great enthusiasm, and were naturally brilliant, at least at that time! Now that we are older, my friends have progressed from owning a bar, to maybe starting our own distillery, as of course we are now much wiser and eminently more worldly. However, none of those grand aspirations have come to fruition, having said that, I did bartend at a Legion for some extra money when I was young serviceman…. But I digress as that was over 30 years ago and you are reading this to get a feel for the movie not my little jaunts down memory lane. Back to the review...

It is at this point, Carrell summons the bartender and proprietor (Cranston) over for a discussion. We now find out that they served together over 30 years ago and had lost touch. Also, a crime that Carrell took the rap for during Vietnam is alluded to: (later in the film we will find out what actually happened) however; it is at this point that Cranston starts to steal the scene, and in our opinion, pretty much the rest of the film. To us, he was an amalgam of many friends that we had over the years in the service, living for the day, funny (in a dark way), a bit of a playboy (at least in their own mind) and having a certain flair for getting the job done, no matter what the cost.

After the initial reunion, the obligatory “Holy Fucks” and “How long has hit been” they begin to reminisce, and pretty much drink till they pass out. (This is actually pretty normal behaviour for old soldiers/sailors/airman when they meet up).  During that time that Carrel requests Cranston to accompany him to gather his son’s remains and attend the funeral. After Cranston agrees to attend, Carrell informs Cranston that they must make a short stop to pick up Fishburne before they can commence their journey to recover Carrell’s son.

Without giving out too many spoilers or key plot lines, their voyage is not without incident, and Carrell and his companions manage to retrieve his son, find out the truth, re-connect with each other, and ultimately do the right thing, not just for the present, but also for the past.

What did we like about the film…? Pretty much everything, the characters were solid, the script flowed and you could follow the story without the requirement for special effects, softer lenses, or gratuitous sex scenes. They told a story. Cranston was phenomenal, as was Fishburne. In this film Carrell was the glue that bonded the other two main characters and carried them along the voyage. One thing that we both really enjoyed about the film is that it did represent the “brotherhood of arms”.  The bonds that are made through military service is far greater than any high school friends, work colleagues, or fraternity. As represented in this film, soldiers the world over can go for years or decades without seeing each other, meet again, and feel that it was only yesterday that they were serving together. It is a true bond, one that even after many years, if a comrade needs help….you will help them, no matter how long it was since you were last together.

As mentioned before, we enjoyed the script immensely and the delivery of it by the main characters were bang on. Sure, there were a few inconsistencies and some errors, (uniform issues, some of military decorum and etiquette, i.e. never would a Lt Col berate a soldier like that, that is where other senior Non-Coms would take care of it etc), but there was nothing serious enough that would make us turn off the movie and call “bullshit”. It was just truly an enjoyable film.

So, if you are looking for a film, with a little bit of dark humour, that tells a story, and you want to watch some stellar performances from Fishburne and Cranston, then “Last Flag Flying” is for you, and I have no doubt that “You will be entertained!”