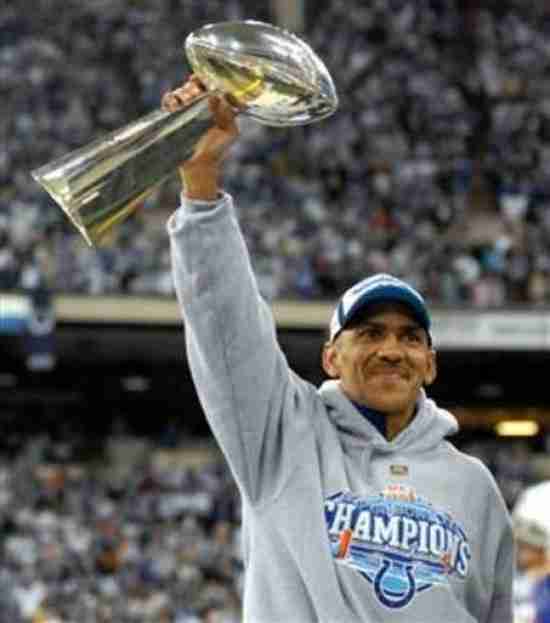 Saying that, we felt it was worth our time to take a look at the 2016 Nominees and debate whether they should have gotten in (or not) and look to the future of the Pro Football Hall of Fame.
Chairman:  Tony Dungy can put me to sleep, and I mean that in a good way.

Spheniscus, do you ever watch golf on a Sunday afternoon and the soothing sounds of the commentators just put you to sleep?  Sometimes that is what I think Tony Dungy could do just by reading the phone book.  What does that have to do with the Hall of Fame?  Not really a whole lot, but you can see why players respond to him and how he is the kind of man who has gone out of his way to help players (namely Michael Vick) in need, and it doesn’t hurt being a good guy that people want to see inducted.

Dungy was considered a lock for a while and I get why.  He is considered likable, has a Super Bowl Win and a high winning percentage but I can’t past that Jon Gruden accomplished what Dungy couldn’t in Tampa Bay

Frankly, that is a big one for me.

Spheniscus: I want to go on record as saying that in the history of my watching football there have only been two people, Hines Ward and Bill Romanowski, who I have liked less than Tony Dungy.

Tony Dungy is the most overrated coach in NFL history. He had a defense which had two (Brooks and Sapp) and likely four (Lynch and Barber) Hall of Famers in Tampa and led them to contender status but couldn’t get over the hump. As soon as he left. BOOM! Championship.

He then moves to Indy, where he inherited one of the five greatest QBs of all time, as well as two of the other 15 finalists this year. While he did get his championship, in the very shadily called victory over the Bears, he was far better at being eliminated in the first round than anything else. They went 13-0 in 2005 and went on to be the first #1 seed ever eliminated by a #6 seed.
That is the legacy of Tony Dungy. An incredibly mediocre coach who was given incredible talent and completely underutilized it. Add in his honey-coated, holier-than-thou sanctimony and I couldn’t stand anything about him and his overrated coaching philosophy.

I know he was elected this year, (even though I thought Marvin Harrison was the only Colts’ person who would get in this year, I didn’t think they would put two guys in from the same team), and I don’t like it. Just like I didn’t like it when his boss Bill Polian, the biggest cheater in league history, got in last year. But what can you do about it? They are the Colts, the league’s darlings. If any team was getting two guys in the same year, it would be them.

Reading this back, I might have a bit of an issue with the Colts. That is definitely true. But I know I am not alone in my belief that Dungy is entirely overrated. If you read the boards after the election, that was probably a 60-70% opinion. He is not a Hall of Famer.

Chairman:  Wow.  And I was feeling bad about how every time I look at his ears I am reminded of Gollum.

Let me ask you this.  Which coach would you have put in his place?  For me, it is former Cowboys Head Coach, Jimmy Johnson, who I think who was far more involved than Dungy in the personnel decisions of the Dallas Cowboys mini-dynasty that yielded three Super Bowls.  I know he was the coach for two of them, but his fingerprints were all over the third.

He also has the likability factor that voters love, a successful broadcasting career and a winning playoff record.

Spheniscus: Jimmy Johnson is a good candidate but he only has 80 career wins. Marty Schottenheimer has 200 wins and a .613 career winning percentage, but not even a single Super Bowl appearance. Mike Shanahan has 170 wins and two Super Bowls, but won’t be eligible in for another two seasons. And Don Coryell’s candidacy depends more on his effect on the game than his actual statistics.

So that leaves two real better candidates than Dungy. Bill Cowher and Mike Holmgren. Cowher has more wins and as many Super Bowl championships and also has a winning percentage over 60%. Holmgren also has the same number of Super Bowls, more wins, a winning percentage just under 60% and completely rebuilt a moribund franchise (Seattle) to the point where it has now become one of the model franchises in the league (a la Bill Parcells with the Patriots).

Both would be better candidates. Cowher would be marginally better. Holmgren significantly better. But give either of them Peyton Manning, Marvin Harrison, and Edgerrin James and they both have more than one Super Bowl victory.

Chairman:  I guess I am far higher on Jimmy than you are.  Again, I point to those three Super Bowls, and yes I am giving him the third!

I like Cowher a hell of a lot better than Holmgren.  Maybe it his longevity with one franchise, or maybe because he looks like a coach more than anyone since Ditka.

Actually, yes that is the reason.

There is just no precedent for a modern coach to have the Gayle Sayers treatment. He coaches two more years even without the championship, he’s a much better candidate.

And you have to give Holmgren the credit for the work he did in Seattle. That puts him far above Cowher in my opinion.