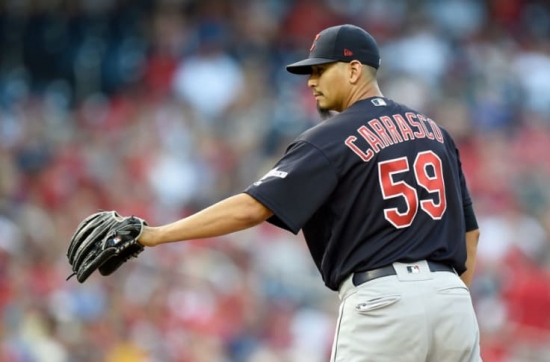 Last time, we looked at the NBA Finals MVP.  This time we went back to baseball, and the Comeback Player of the Year.

This is a recent award, first created in 2005, so the sample size at present is not a large one, but that has not stopped us before.  As with most awards in the Majors, there is one issued for both the National League and the American League.

So how many MLB Comeback Player of the Years have made the Baseball Hall of Fame?

The following are the past players who have won the Comeback Player of the Year who are eligible for the Baseball Hall of Fame and have been enshrined.

Mariano Rivera was already entrenched as the greatest Relief Pitcher in history before he won this award, and in 2012 it looked like he had to retire.  In May of that year, he tore his ACL, and it was expected that he would not return, but he did and was back in form.  In what was his final season, the career Yankee had 44 Saves and was an All-Star for the 13thtime.  Rivera ended his career as the all-time leader in Games Finishes (952), Saves (652) and ERA+ (205).  Inducted into the Hall of Fame in 2019.

The following are the players who have won the Comeback Player of the Year who are eligible for the Baseball Basketball Hall of Fame and have not been selected:

Injuries compiled on Garciaparra for years, taking him away from surefire Hall of Famer to also-ran.  He missed most of 2005 due to a torn groin, but 2006 had Garciaparra go to his first All-Star Game since 2003.  Garciaparra had 20 Home Runs, and batted .303 this year.  Realistically, this was his last good year, and he retired in 2009.  Eligible Since 2015.  Was on the ballot for two years in 2015 finishing as high as 5.5% in 2015.  Unranked on Notinhalloffame.com.

Carlos Pena had a pair of 100 Hit years, and had a 27 Home Run season in 2004, but he was released by the Tigers before the start of the 2006 season.  He signed with the Yankees, but was released before he played for them.  He did manage to get in 18 Games for Boston, but was in the minors for most of the year.  Pena signed a minor league deal with Tampa before the 2007 season, and he rewarded them with a 46 Home Run and .282 Batting Average year.  Pena was ninth in MVP voting, and two years later he won the Home Run Title (39) and was an All-Star.  Pena would later play for the Cubs, Houston, Kansas City and Texas.  He retired with 286 Home Runs.  Eligible Since 2020.  Was on the ballot for one year in 2020 but did not receive any votes.  Unranked on Notinhalloffame.com.

An All-Star in 2003 with the Detroit Tigers, Young’s 2006 season was his last in Motown, where he only played in 48 Games, had a sub .300 OBP and was treated for substance abuse and depression.  The Tigers released him that year, and it looked like his career might be over.  The Nationals signed Young, and in 2007 he was an All-Star again and he batted .320, which was good enough for fifth in the NL. He played one more season, and he retired with 1,389 Hits and 171 Home Runs.  Eligible Since 2014.  Although Young was eligible in 2014, he was not on the ballot.  Unranked on Notinhalloffame.com.

An All-Star in 2005, Lidge’s game fell apart after and he dropped to 19 Saves in 2007 from his 42 two years before.  Lidge joined the Phillies, and he was an All-Star again with 41 Saves and an ERA of 1.95.  Lidge finished fourth in Cy Young voting, was an All-Star, and won the Rolaids Relief and Delivery Man of the Year Award.  The Phillies won the World Series that season, and Lidge was the first player to win the Comeback Player of the Year and the World Series in the same year.  Lidge played until 2012 and retired with 225 Saves.  Eligible Since 2018.  Was on the ballot for one year and received 0.5% of the vote.  Unranked on Notinhalloffame.com.

In 2007, Carpenter threw only six innings and underwent Tommy John Surgery and he was only on the mound for 15.1 Innings in 2008 due to shoulder issues.  The Pitcher stormed back as the Cy Young runner-up and had a 17-4 record while leasing the National League in ERA (2.24).  Carpenter would be an All-Star again the following year, and he played until 2012, finishing his career with a 144-94 record.  Eligible Since 2018.  Was on the ballot for one year and received 0.5% of the vote.  Unranked on Notinhalloffame.com.

An All-Star twice with Oakland, Tim Hudson joined the Braves in 2005 and did well until Tommy John Surgery took him out in 2008 and he missed most of 2009.  In 2010, he was an All-Star again with a 17-9 record and a fourth place finish in the Cy Young.  Hudson was an All-Star again in 2014 as a San Francisco Giant and retired the year later with 222 Wins and 2,080 Strikeouts.  Eligible Since 2021.  His first year of eligibility is this year.  Ranked #101 on Notinhalloffame.com.

Lance Berkman was a five-time All-Star with the Astros, but in an injury plagued 2010 he only had 14 Home Runs and batted .249. Berkman joined the Cardinals and blasted 31 Home Runs, was an All-Star for his sixth and final time and he helped the Cardinals win the World Series.  He played two more seasons and retired with 1,648 Hits, 326 Home Runs and 1,090 RBIs.  Eligible Since 2019.  He was on he ballot for one year and had 1.2% of the ballot.  Ranked #88 on Notinhalloffame.com.

The following are the players who have won the Comeback Player of the Year in MLB who have retired but have not met the mandatory years out of the game to qualify for the Baseball Hall of Fame:

Aaron Hill suffered a concussion in late May of 2008, and he was put for the remainder of the season.  Hill came back to have the best season of his career where he was an All-Star for the first and only time of his career, and would post career-highs in Home Runs (36), RBIs (108) and Hits (195).  The Second Baseman would also win his lone Silver Slugger this season. Hill went on to play for Arizona, Milwaukee, Boston and San Francisco, and he retired with 1,501 Hits and 162 Home Runs.  Eligible in 2023.

Thoracic Outlet Syndrome held Chris Young to only nine minor league starts in 2013, and he was a long way removed from his 2007 All-Star year in San Diego.  Young was a Mariner for only this season, and he went 12-9 with a 3.65 ERA.  He played three more years with Kansas City, winning a World Series ring and retiring with 79 Wins against 67 Losses.  Eligible in 2023.

Chris McGehee debuted in 2008, and had a decent 2010 season, but was a journeyman after that, playing in Japan in 2013. McGehee returned to the Majors as a Miami Marlin, and he would collect 177 Hits with a .287 Batting Average.  He went back to journeyman status and was out of the majors after 2016.  McGehee had 721 Hits over his career.  Eligible in 2022.

The following are the players who have won the MLB Comeback Player of the Year who are still active.

Fernando Rodney los the closers job with the Angels the year before with only three Saves and a 4.50 ERA.  With the Rays, he came back with a vengeance with 48 Saves, a 0.60 ERA, a 0.777 WHIP and a fifth place Cy Young finish.  43 Years Old, Free Agent.

Liriano made history as the first player to win the Comeback Player of the Year twice, and he did it in both leagues.  This time, he made a comeback after an awful 2012 split between Minnesota and Chicago (AL), and in his first season as a Pirate he had his best year in baseball.  Liriano went 16-8 with a 3.02 ERA and a ninth-place finish in Cy Young voting.  36 Years Old, Playing for the Philadelphia Phillies.

After having six good seasons with the Detroit Tigers, Rick Porcello joined the Red Sox, but had a poor year with a 9-15 record and an ERA near five.  Porcello had a monster 2016 with a 22-4 record and a league-leading SO/BB (5.91). He would also win the Cy Young, and two years later, he helped Boston win the World Series.  31 Years Old, Playing for the New York Mets.

Rendon had a great 2014 year with a fifth place finish in MVP voting.  The season after, he had a poor year and missed his share of games, but he bounced back with a 20 Home Run year in 2016. Rendon would later lead the Nationals to their first World Series win in 2019.  29 Years Old, Playing for the Anaheim Angels.

Mike Moustakas helped the Royals win the 2015 World Series, but in 2016, he had a torn ACL and only played in 27 Games.  In 2017, Moustakas was an All-Star for the second time and he belted 38 Home Runs, his personal best.  31 Years Old, Playing for the Cincinnati Reds.

Greg Holland was an All-Star closer in 2013 and 2014, and he was injured late in the 2015 season, which coincided with the Royals World Series win.  Holland missed all of 2016 following Tommy John Surgery, and he returned in 2017, though with Colorado.  Holland was again an All-Star and he led the National League in Games Finished (58) and Saves (41).  31 Years Old, Playing for the Kansas City Royals.

David Price had a down year in 2017 with elbow issues holding him to 16 Games, but he was healthy in 2018 and went 16-7 with 177 Strikeouts. Price and the Red Sox would win the World Series this year.  34 Years Old, Playing for the Boston Red Sox.

With all due respect to all of the other winners, this has to be the most inspirational winner ever.  Venters was an All-Star in 2011 (his second year in the league) and he led the National League in appearances (2011).  Venters would have arm trouble and had to endure his second and third Tommy John Surgery, and after last playing in 2012, he returned in 2018, now as a Tampa Bay Ray. He was traded back to the Braves in July of that year, and would see more action than he had as a Ray. Venters had a total 5-2 record with three Saves.  35 Years Old, Playing for the Boston Red Sox.

In 2018, injuries held the former MVP to 52 Games, but Josh Donaldson had a lot to prove in 2019.  The Third Baseman joined Atlanta as a Free Agent and in his comeback year he had 37 Home Runs and 94 RBIs.  34 Years Old, Playing for the Minnesota Twins.

The Comeback Player of the Year was all over the place and based on what we see, its percentage of Hall of Famers will likely decline.

We return to basketball and the J. Walter Kennedy Citizenship Award, which is awarded to the player who shows the most outstanding service and dedication to the community.

More in this category: « NASCAR: Real Competition Is Not Only Between Cars and Drivers NBA Players who retired too soon »