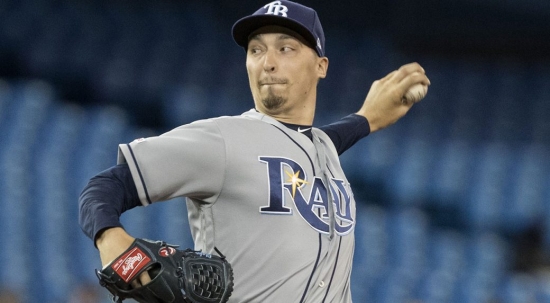 As of this writing, Blake Snell has completed four seasons with the Tampa Bay Rays, which you could argue has been three mediocre years and one great one.  Of course, that great one was a Cy Young Award winning season.

Snell would make his Major League debut in 2016, going 6-8 with 19 starts.  It was a fine year, and he would have a similar sophomore season where he went 5-7 with a 4.04 ERA.  While this was not spectacular numbers, Snell was considered to be a potential star, which is exactly what he gave them in 2018.

This was the season where Snell won the Cy Young Award, with a league leading 21 Wins against only five losses.  Snell would lead the American League with a stellar ERA (1.89), ERA+ (217), and H/9 (5.6) and also had a WHIP under 1.000 (0.974).  It was a fight for respect all year with Snell, who was struggling to get even All-Star attention (he did make that team), and realistically, he went from nowhere to the Cy Young.

If this seems too high at this time, we do reward great seasons, and this is a very young team.  It will be fascinating going forward to see if Snell is a one-season wonder or not.