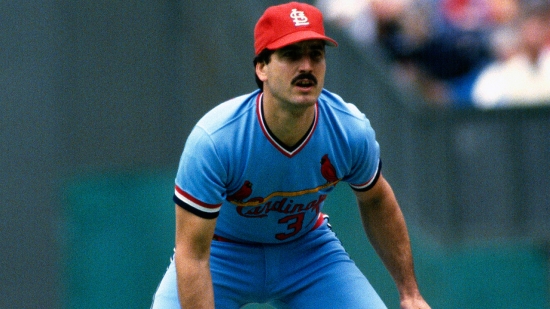 Keith Hernandez is probably more known for his time with the New York Mets but he actually had better stats with the St. Louis Cardinals and it was in the Gateway to the West where he had his best season in Baseball.

Hernandez was a very late round draft pick (42nd Round) and he certainly exceeded expectations with both his bat and glove.  Hernandez would have an MVP season in 1979 where he was the National League Leader in Runs Scored (116), Doubles (48) and Batting Average (.344) while also having a 105 RHI season.  He would bat over .300 the next two seasons and was also the leader I On Base Percentage in 1980.

Where Keith Hernandez also stood out was his defensive ability.  Normally a First Baseman wasn’t thought of as having any glove skill but Hernandez looked to revolutionize the position playing it more aggressively and he was rewarded with multiple Gold Gloves and he was a perennial leader in Total Zone Runs for First Basemen.

While he was certainly a star for the Redbirds, he ran afoul of Manager Whitey Herzog who felt he was a detriment to the team and he was traded to the New York Mets at the prime of his career.