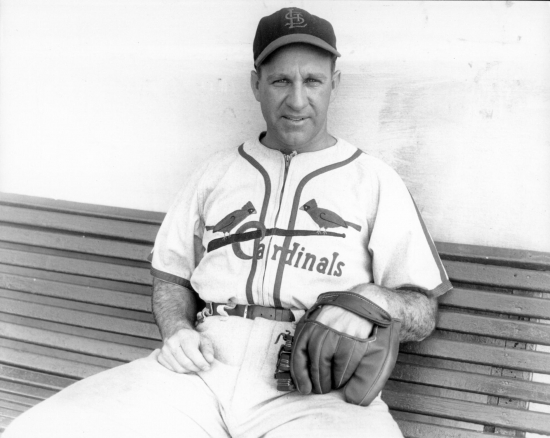 If you are a regular reader of Notinhalloffame.com, you know that we are a sucker for what we consider great sports names.

Enos Slaughter is a pretty good one on its own, but when you throw in the nickname and you have; Enos “Country” Slaughter, a name that we think is so awesome that we were tempted to jump it up the rankings for that reason alone!

For the record, we didn’t do that!

Cracking the Cardinals roster in 1938, Slaughter debuted with a .278 Batting Average, which was certainly respectable but more notably was the lowest he would ever have while playing there, and considering he was a regular for St. Louis for a decade and a half says and awful lot.  Slaughter would proceed to have eight .300 seasons for the Redbirds and had he not had to serve his country in World War II, it could have been eleven.

Slaughter was a more than competent contact hitter who would accrue over 2,000 Hits for the Cardinals.  A ten time All Star, Slaughter would bookend his World War II stint with World Series wins (1942 & 1946), the latter of which would see him score the series winning Run.  That year, and in 1949 he would finish third in National League MVP voting and in 1942 he was the runner-up for the accolade of the best player in the senior circuit.

Slaughter would later win two more World Series Championships with the New York Yankees and would enter the Baseball Hall of Fame via the Veteran’s Committee in 1985.