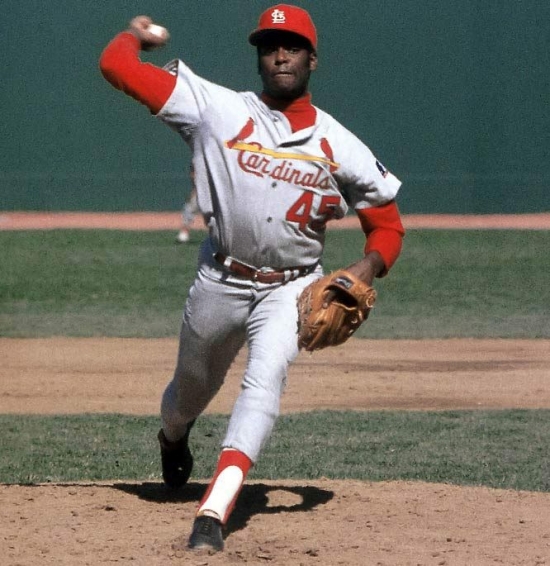 We don’t think there is much of a stretch to say that Bob Gibson is the greatest St. Louis Cardinals Pitcher of all-time.

How can he not be?

Signing with the team as an Amateur Free Agent before the 1957 season, Gibson would debut in 1959 and by ’61 he was a fixture in the starting rotation.  While he had already proven himself in the Majors for a few years, the 1964 World Series was arguably his coming out party.  Gibson would start three games, winning two of them and securing a championship for St. Louis while setting a World Series record of 31 Strikeouts.

This was “The Year of the Pitcher” and in the rival American League Denny McLain of the Detroit Tigers would also win the MVP and Cy Young.  McLain and Gibson met in the 1968 World Series, though this time the Cardinals would lose though the intimidating Gibson was stellar again with three starts, 27 Innings and a 1.67 ERA and 0.815 WHIP.  Gibson and other Pitchers were so good that MLB lowered the pitcher’s mound by five inches and reduced the height of the strike zone.

Despite the rule changes, Gibson was still an elite Pitcher and he would win his second Cy Young in 1970.

It is certainly worth mentioning that Gibson was a pretty good hitter (24 Home Runs) and defensively he was a nine time Gold Glove winner.

Bob Gibson would be chosen for the Baseball Hall of Fame in 1981, which was his first year of eligibility.