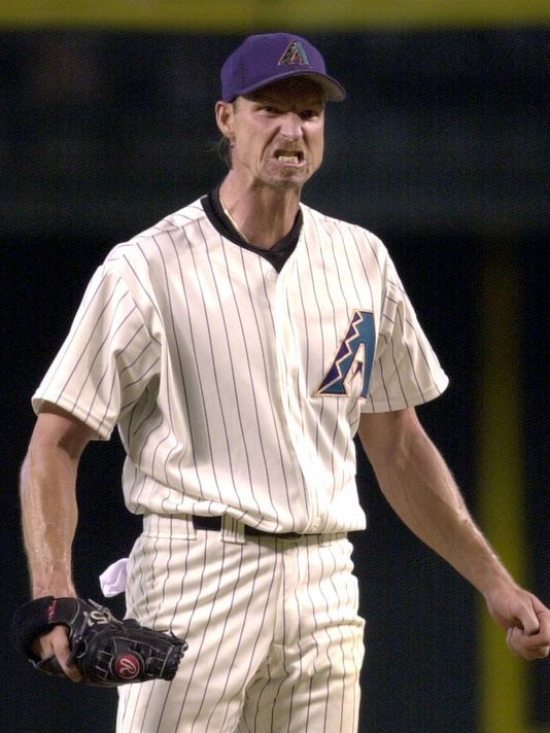 Going into this process we knew that Randy Johnson was likely going to be ranked number one.  What we didn’t realize is just how wide that chasm was going to be between him and everyone else!

“The Big Unit” actually has a longer tenure with the Seattle Mariners but when he signed with Arizona prior to the 1999 season he took his game to a whole other level that made him the unquestioned best hurler in the game.  Johnson had already been a star in Seattle, having gone to the All Star Game five times there and winning the American League Strikeout crown four times along with an ERA crown once.  He also won the 1995 AL Cy Young Award, yet despite all of those accomplishments the best was yet to come.

In 1999, Johnson would win his first Cy Young in the National League while finishing first in ERA, Strikeouts and FIP.  The key word in that last sentence was “first” as he would win the next three Cy Youngs while again winning the SO belt.  He would only win the ERA title of two of those three years.  Arguably that 1999-2002 stretch is one of the greatest four year runs in not just National League history but in the entire canon of the game.  We think it is safe to say that no Diamondback will touch that in our lifetime.

Oh, there is something that needs to be mentioned during that time, his performance in the 2001 Post Season.

In the NLCS and World Series, Johnson went 5 and 0 with a WHIP well under 0.800 and an ERA of 1.08.  He was named the Co-MVP (along with Curt Schilling) of the 2001 World Series and there is no chance that the D-Backs win the World Series without him.

Overall, Johnson went 118 and 62 with 2,077 Strikeouts with Arizona over an eight year span.

Appropriately, Johnson would enter Cooperstown as a Diamondback, the first and to date only player to do so.  Even less of a surprise was that he entered the Baseball Hall of Fame on his first vote with 97.3 percent of the ballot.

More in this category: 2. Paul Goldschmidt »