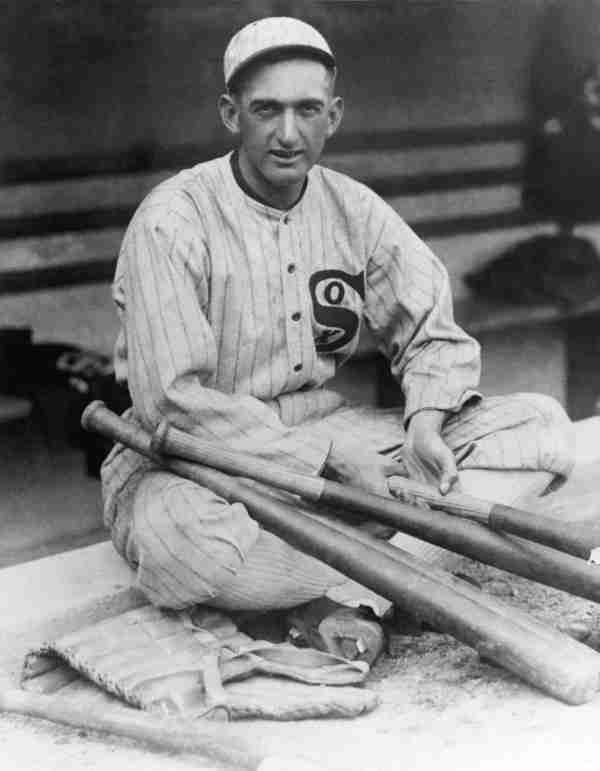 Prior to his expulsion from baseball, Jackson had already proved himself Hall of Fame worthy.  In ten full Major League seasons, Shoeless Joe had over 1,700 hits and had a career batting average of .356.  The latter remains iconic as this puts him third All Time.  Jackson was easily amongst the hardest workers in baseball and his passion for the game was unequalled.  He was in his prime when he was suspended and he clearly had many more great seasons ahead of him.

Where it gets murky is his participation in throwing the Series.  Evidence does point that he was aware of it but after his Grand Jury Testimony where he claimed involvement he proclaimed his innocence for years thereafter.  Jackson may have been a great player, but he was not an educated man, and by many accounts naïve.  It is very possible that he was unaware of the ramifications of testifying that he received $5,000 to help throw the Series.

As he claimed his innocence, he had the stats to back up his claim.  He batted .375 in the Series and made no errors in the field.  If anything, the box scores shoes the efforts a man who played to win.  As seen with our first selection, Major League Baseball has a zero tolerance policy for gambling and there are many reasons to think that this will not change in the near or distant future.  As there are is some doubt about his guilt and considering his overall contribution to the game, we are hoping that MLB will reinstate Shoeless Joe Jackson and enshrine him in to the Baseball Hall of Fame.  Sadly, he has been declared ineligible since the Hall’s inception….any real reason to think it will change now?

Should Shoeless Joe Jackson be in the Hall of Fame?

Should Shoeless Joe Jackson be in the Hall of Fame?

12
+1 #16 Dirk 2019-10-23 16:57
I'm in the middle on most of these issues when it comes to the Hall, it's a museum that should acknowledge achievements regardless of their disciplinary status, by all means Pete Rose should be banned from MLB events, but he should be in the Hall for his contribution s to the game. Same with Joe who is long dead anyway. Perhaps that can be the rule: They can be let in but after they die, as it is a lifetime ban after all. Or let them in but acknowledge their alleged transgressio ns on the plaque, so history remembers the good and bad
Quote
+1 #15 EW 2019-10-11 16:28
Does taking money from gamblers to throw the series and not following through on it really make him any better than if he threw it?

So he's an even less honorable criminal

However, I do agree with you about Buck Weaver...

He shouldn't be in, not due to the alleged Black Sox scandal, but because he was a despicable racist, who would belittle and demean black players with regularity.


IF that's the case, there are black players now in the HOF who should be removed, don't you agree?

Where is your proof? Your evidence?
Quote
+2 #12 Darryl Tahirali 2016-07-18 21:33
The only critical difference now between players such as Jackson and Rose, officially banned from baseball, and the PEDs pariahs is that baseball still does not condone gambling but it is willing to give contracts to players who get caught using PEDs but are still under the threshold of getting banned.

The more I look at this, the more I think that the Hall of Fame should not be the arbiter of morality. I used to draw the line between the PEDs players and the gamblers, but I may be reconsiderin g.

May be reconsiderin g. Baseball seems to have a no-tolerance for gambling but not for PEDs, as that is a graduated system. Perhaps a permanent ban on the first offense, with an appeals process to address discrepancie s, errors, etc.

He shouldn't be in, not due to the alleged Black Sox scandal, but because he was a despicable racist, who would belittle and demean black players with regularity.


There is zero proof of this anywhere. None of his bio entries mention any racism, unlike, say, Ty Cobb and Cap Anson (two hall of famers)...
Quote
-3 #10 Vaffan 2015-07-01 18:16
The one point missed is that Jackson played LF and as such, the 1919 Reds had three triples on hits to LF. Sorry, but while offensively it appears that Jackson played well. Defensively, he played worse than a normal player.

Therefore, no Hall.
Quote
-4 #9 Axel 2015-04-23 22:58
It is unclear whether or not Jackson intentionall y played poorly at key times during the 1919 Series, or if he merely took $5,000 (and was promised more) to be involved in throwing the Series, and played his best despite that. Anyone who doubts whether he openly took money to throw the Series should read the testimony at two trials (they are on line). He clearly took money. The judge at one trial also accused him of perjury.

Claiming stupidity is not a valid defense. Though illiterate, he was smart enough to run a successful liquor store for many years. Even illiterates know right from wrong (most of the Apostles were illiterate).

Should baseball forgive and forget? Forgive, forget the sin, and honor a crook in the Hall of Fame?

No. How about just forget him? It's been 90 years.

Better to consider whether Buck Weaver should be reinstated.
Quote
-11 #8 Juels 2015-02-14 16:04
He shouldn't be in, not due to the alleged Black Sox scandal, but because he was a despicable racist, who would belittle and demean black players with regularity.
Quote
+6 #7 Park3 2014-11-16 07:26
If he is guilty as charged I can understand a lifetime ban. But an eternal ban? Baseball - a mere pastime - takes itself way too seriously.

If this happened in the modern day and a player was suspected to be part of a group throwing a game but it could not be proven, a ban would not hold up.
Quote
12
Refresh comments list
RSS feed for comments to this post