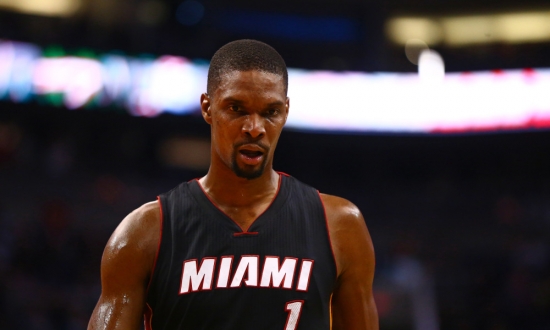 Regular visitors of Notinhalloffame.com know that we are slowly working on the top 50 of every major team in the NHL, NBA, NFL and MLB. Once that is done we intend to look at how each team honor their past players and executive.  As such it is news to us that the Miami Heat have announced that they are retiring the number 1 of Chris Bosh on March 26 when they host the Orlando Magic.

Bosh joined the Miami Heat after the 2009-10 season where he joined Dwayne Wade and fellow Free Agent, LeBron James to make a superteam. Bosh was named an All Star and helped the Heat reach the NBA Finals where they would go down to defeat against the Dallas Mavericks.  He would however help the Heat reach the Finals the next season and this time they would win by defeating the Oklahoma City Thunder.  The Heat would win again in 2013 with a win over the San Antonio Spurs though they would lose to San Antonio the following year in the Finals.

James would rejoin Cleveland, but Bosh remained at an All Star level and he was named one in all six of his seasons with Miami.  He played for them last in the 2015-16 where his year was shortened when he suffered blood clot issues where and he would never play again.

Overall as a member of the Miami Heat, Bosh played 384 Regular Season Games with an 18.0 Points per Game Average.  Bosh becomes the fourth person to have his number retired following Alonzo Mourning, Tim Hardaway and Shaquille O’Neal.

We here at Notinhalloffame.com would like to congratulate Chris Bosh for earning this honor.

More in this category: « The Pro Football HOF Class is announced! The Women's Basketball Hall of Fame announces its latest class »