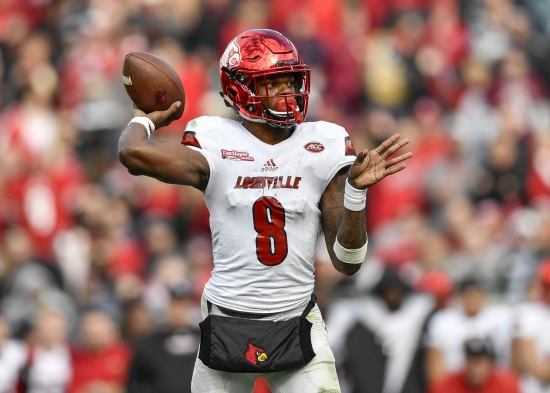 Regular visitors of Notinhalloffame.com know that we are slowly working on the top 50 of every major team in the NHL, NBA, NFL and MLB.  Once that is done, we intend to look at how each team honor their past players, coaches and executives.  As such, it is news to us that the University of Louisville have announced that they will be retiring the number 8 of former Quarterback, and current Baltimore Ravens star, Lamar Jackson.

Jackson becomes only the second former Cardinal to have his number retired, joining fellow former QB, Johnny Unitas, whose number 16 was taken out of circulation in 2003.

Jackson played three years at Louisville, debuting in 2015 when he led the Cardinals to a win at the Music City Bowl.  He was untouchable as a sophomore, throwing for 3,543 Yards and 30 Touchdowns while rushing for 1,571 Yards and 21 Touchdowns.  Jackson not only won the Heisman, he was the recipient of the Maxwell Award, Walter Camp Award, AP Player of the Year, and the ACC Player of the Year.  He had another good year in 2017, his junior year, with 3,660 Passing Yards, 27 Touchdown Passes, and 1,601 Rushing Yards with 18 Rushing TDs.  Jackson would repeat as the ACC Player of the Year.

We here at Notinhalloffame.com would like to congratulate Lamar Jackson for earning this prestigious honor.

Kirk Buchner, "The Committee Chairman", is the owner and operator of the site.  Kirk can be contacted at [email protected]halloffame.com . Email This email address is being protected from spambots. You need JavaScript enabled to view it.