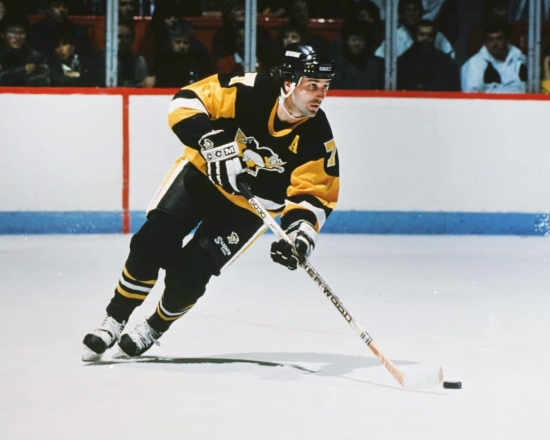 Paul Coffey will always be known for what he did in Edmonton, but if you were to come up with a second team for Coffey (he actually played for nine NHL teams) it should be the Pittsburgh Penguins.

Coffey would help the Oilers win the Stanley Cup three times but was unable to come up with what he felt was a suitable contract with Edmonton Head Coach and General Manager, Glen Sather.  Coffey would be shipped off to Pittsburgh, where he would play the next four and a half seasons, and he would maintain his status as the game's premier offensive defenseman.  As a Penguin, he would never not be selected for an All-Star Game, and in the 1988-89 season, he would be named a First Team All-Star, was the runner-up for the Norris Trophy while finishing fourth in Assists.  The following year was almost as good with Coffey finishing fourth in Norris Trophy balloting, fifth in Assists, and was a Second Team All-NHL Selection.  Coffey would then collect his fourth Stanley Cup with the loaded Penguins team in 1991.  He would rejoin his former teammate, Wayne Gretzky, in Los Angeles.

Overall with the Pens, Paul Coffey would score 440 Points in 331 Games, a PPG for a Penguins blueliner that will likely never be touched.