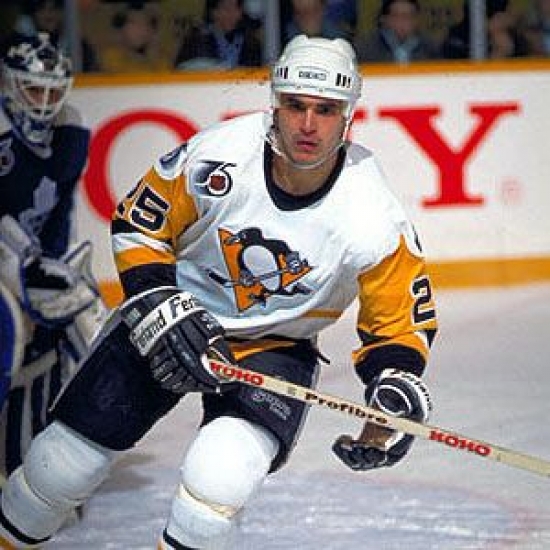 Kevin Stevens played the first half of his NHL career with the Pittsburgh Penguins, and it was in the Steel City where he easily had his best success.

The Los Angeles Kings 108th Overall first drafted the American Left Winger in 1983, but his rights would be traded to Pittsburgh, who clearly had a diamond in the rough.  Debuting for the Pens in 1987, Stevens would slowly ascend to one of the top Power Forwards and Left Wingers in the National Hockey League.  His breakout season was a 70 Point campaign in 1989-90, which he increased the following season to 86 Points and a Second Team All-Star.  More importantly, he was a huge part of Pittsburgh's first Stanley Cup Championship and was the league-leading Goal scorer in the Playoffs.

Stevens had an even better 1991-92 campaign.  This season would be the best of his career, where he had a career-high of 123 Points, which was second overall, as was his 54 Goals.  A First Team All-Star for the first and only time, Stevens would again assist Pittsburgh to win their second Stanley Cup.  That may have been the last Cup for Stevens, but he kept scoring.  He had 111 Points in 1992-93 with a career-high 55 Goals, and it earned him another Second Team All-Star selection.

He would play with Pittsburgh until he was traded to Boston in 1995, and he would return in 2001 where he would finish his career.  As a Penguin, Stevens scored 555 Points in 522 Games.