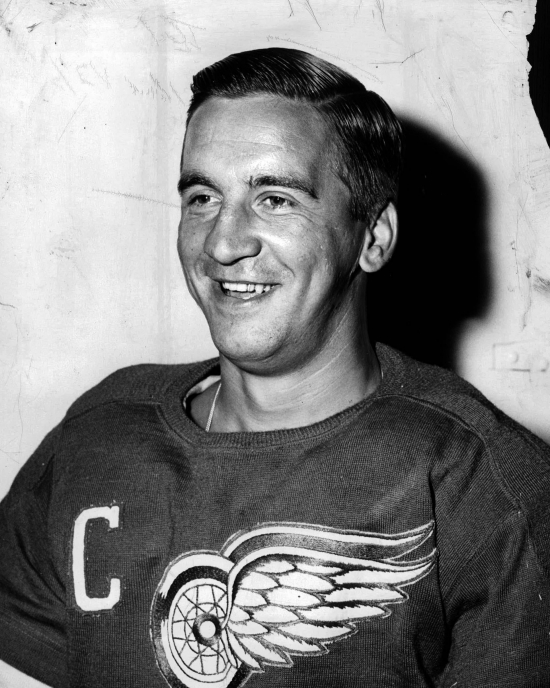 The importance of Ted Lindsay extends far beyond what he did on the ice, but we will get there later.

Lindsay debuted in the NHL as a teenager, first suiting up for the Det Red Wings in 1944. He did well as a rookie, scoring 23 Points and finishing third in Calder voting, and after a sophomore slump, he was on his way to becoming to best Left Wing in hockey.

The "Hockey Gods" were smiling on Lindsay, who was placed on a line with a fellow youngster, Gordie Howe, and veteran, Sid Abel.  The trio would be dubbed the "Production Line," and this was the triumvirate that led the offensive firepower for the Red Wings in the first half of the 1950s.  In 1947-48, Lindsay won the Goal Scoring Title, lighting the lamp a career-high 33 times.  For his efforts, Lindsay was a First Team All-Star, and he was a Second Team All-Star in the last full season of the 1940s.

Lindsay was a fan favorite in Detroit, and how could he not be?  He only stood at 5’ 8” and was 160 Pounds on a good day, but he used his elbows and knees like deadly weapons and was one of the toughest men on the team.  The Ontarian had a five-year streak of First Team All-Star Selections (1949-50 to 1953-54), and he won the Art Ross Trophy in the first year of that celebrated run. Detroit was a team on fire, with Lindsay as their spark plug.  The Red Wings won the 1950, 1952, 1953, and 1955 Stanley Cup, and Lindsay was a First Team All-Star in the two years that followed, with his second Assists Title coming in 1956-57.

As good as he was, Lindsay was a man who was ahead of his time.  He sparked outrage amongst the hockey executives as he spearheaded a drive to form a union to protect the players.  It resulted in him being traded to Chicago and a pariah in some circles, but nevertheless, the NHL Players Association was formed.  Lindsay played three years before retiring, but his old linemate and now Detroit executive, Sid Abel, coaxed him to play in 1964.  That lasted for a year, and he retired for good in 1965 with 728 Points as a Red Wing.

Because of his pioneering work in the NHLPA, the Lester B. Pearson Award, which is voted by the players, was later renamed the Ted Lindsay Award.

Lindsay received the call for the Hockey Hall of Fame in 1966, and in 1991, the Red Wings retired his number 7.