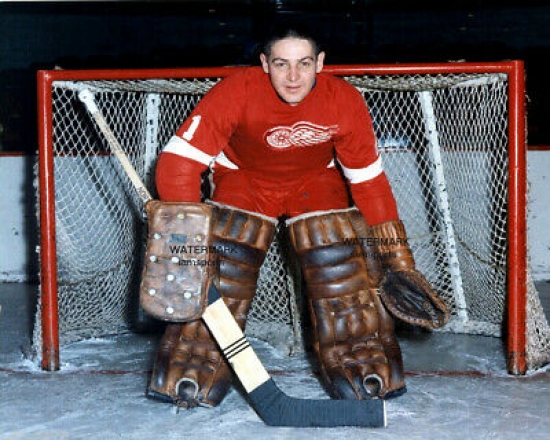 From a Ukrainian background in the tundra of Winnipeg, Terry Sawchuk is one of the greatest hockey players to come out of the province of Manitoba.  The Red Wings signed the Goalie in 1947, and after a stint in the minors, he was called up to replace the injured Harry Lumley late in the 1949-50 Season.  Lumley never played for Detroit again.

Sawchuk easily won the Calder in 1950-51, and he led the NHL Goalies in Wins (44), Shutouts (11), Goalie Point Shares (17.0), and he was named a First Team All-Star.  There was no doubt that Sawchuk was the best Goalie in hockey that year, but he would prove that he was the best netminder in the first half of the 1950s.

As great as Sawchuk was, Detroit deemed him expendable, as they had Glenn Hall waiting in the wings.  He was traded to Boston, but that stay was a disaster for both parties.  In his second year, Sawchuk was diagnosed with mono, and he retired, citing exhaustion. It was a bad look for Sawchuk, and even if he were to return, the Bruins fans wanted nothing to him.  Detroit traded Hall to Chicago, and reacquired Sawchuk for run number two in the Motor City.

Sawchuk’s second stint as a Red Wing stretched from 1957 to 1964, and he was still a good goalie.  In two of those years, Sawchuk was a Second Team All-Star, with both years earning a top-five finish for the Hart.  The Toronto Maple Leafs landed him the 1964 Intra-League Draft, and after winning another Cup there.  After a season with Los Angeles, Sawchuk returned to Detroit for one more year, playing as a backup.  Sawchuk went to the Rangers for a final year before retiring.