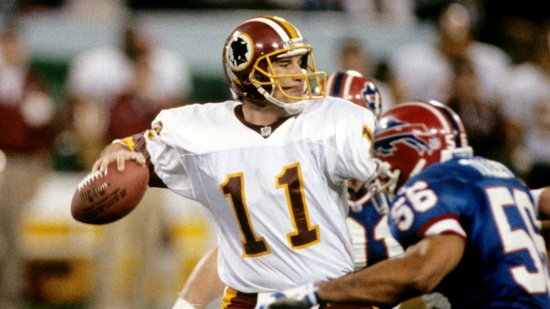 The career of Mark Rypien is an interesting one, but as much as some people could say that he was lucky, he was also very good when needed to be.

Rypien's ascent to starting Quarterback of Washington was slow, to say to the least.  After being drafted in the Sixth Round from Washington State in 1986, Rypien was on injured reserve for his first two years before finally being on the roster as the third-stringer behind Jay Schroeder and Doug Williams.  Rypien might have started the season at number three, but Schroeder was ineffective and traded, and Williams got hurt.  This allowed Rypien to start six games, going 3-3, and showing skill to unseat Williams in 1989.

It was the right decision, as Rypien went to the Pro Bowl that season, and again in 1991, where he took Washington to a 14-2 record and a league-leading 14.3 Yards per Completion.  The Redskins won the Super Bowl, with Rypien winning the MVP for the game with a 292 Yard and two Touchdown performance in the win.  He had a good year in 1992, but a knee injury made him ineffective in 1993, and he was released after the season’s end.