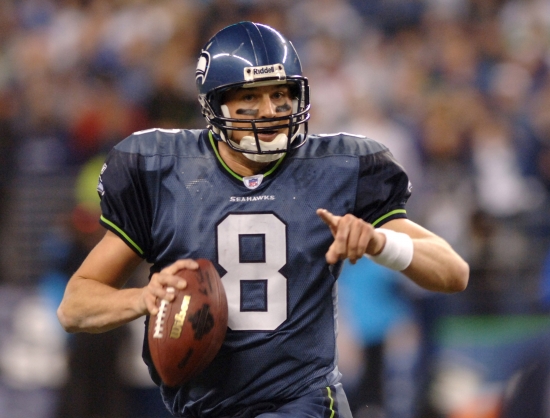 When Mike Holmgren left the Green Bay Packers to coach Seattle, he knew that Matt Hasselbeck, the backup to Brett Favre, was NFL ready.  He was right and engineered a trade for the pivot, who took over as the starting QB in 2001.

Hasselbeck went to his first Pro Bowl game in 2003, and he would have 3,841 Passing Yards with 26 TDs.  He would have at least 3,000 Passing Yards in six of the next eight years, and he secured two more Pro Bowls (2005 & 2007).  Hasselbeck will be mostly known as a Seahawk for taking the team to their first Super Bowl (XL), but they would lose to the Pittsburgh Steelers.

While it was expected that he would stay longer in Seattle, he signed with the Tennessee Titans as a Free Agent in 2011, when it appeared that Seattle no longer wanted his services.  With Seattle, he had 29,434 Passing Yards with 174 Passing Touchdowns.