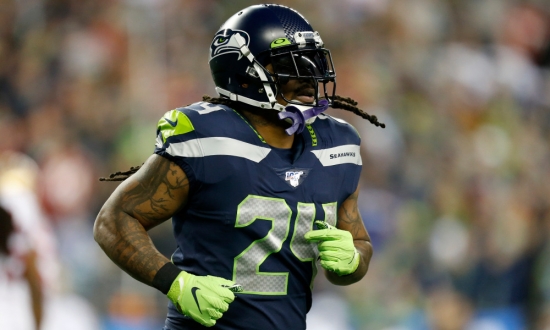 Many in the city of Buffalo are still upset that they traded Marshawn Lynch for a pair of draft picks in 2010, and in that year’s playoff, “Beast Mode” became a nationally known figure.

The skittles-loving Running Back went on a four-year run of Pro Bowls, 1,200 Yard plus Rushing Yard years, and at least 11 Touchdowns from the ground.  He was a First Team All-Pro in 2012 and led the NFL in Rushing TDs in 2013 and 2014.  The Seahawks would win Super Bowl XLVIII, with Lynch getting a TD in their dismantling of the Denver Broncos.  Lynch and the Seahawks returned to the Super Bowl the following year, yet he was denied a back-to-back title.  Many pointed at Lynch for the loss, but not because of what he did, but because they did not give him the ball when they were driving late in the game and were at the Patriots one-yard line.  They threw instead of giving it to Lynch, and the ball was picked off, cementing the Super Bowl win for the Patriots.  Prior to that, Lynch had rushed for 102 Yards with a TD.

Lynch retired after the 2016 season, but sought a return to the NFL as an Oakland Raider, and the Seahawks traded his rights for that to happen a year later.  After Lynch retired a second time, he came back to Seattle in late 2019 for their playoff run.