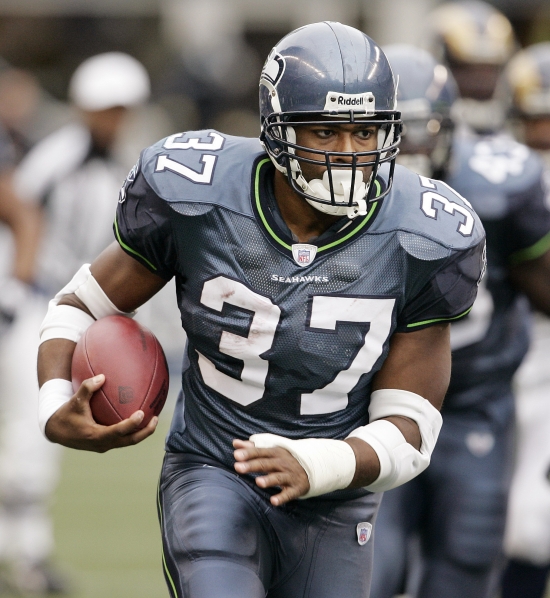 Shaun Alexander was a star at the University of Alabama, and the Seattle Seahawks were able to secure him with their first round pick in the 2000 Draft.

Alexander had a slow start, but he was there to back up Ricky Watters and did not see that much action.  This would change in his second year, where he had his first of what would be five straight 1,100 Yard seasons on the ground.  Alexander would lead the NFL in Rushing Touchdowns (14) in 2001, and in 2003, he would begin a three-year streak of Pro Bowls.  His best year in Football was in 2005, where he won the Rushing Title (1,880) and tied a since broken record with 27 Rushing Touchdowns.  Alexander won the AP MVP, NEA MVP, PFWA MVP, Bert Bell Award and Offensive Player of the Year.  This year was by far the high-water mark of his career, as he would begin to suffer injuries, and his production was sliced in half.  He was cut after the 2007 season and played for the Washington Redskins for what felt like a cup of coffee before retiring shortly after.

Over his career, Alexander was a one-man touchdown machine, rushing for an even 100 Touchdowns, and catching another 12.  With the Seahawks, he would accumulate 10,940 Yards from Scrimmage.